Trillium decipiens, also known as Chattahoochee River wakerobin or deceiving trillium, is a spring-flowering perennial plant. It occurs mostly near the Chattahoochee River in Alabama, Florida and Georgia. Scattered populations are found elsewhere in these three states, all within the Atlantic Coastal Plain or Gulf Coastal Plain. Rich deciduous woods of bluffs, ravines, and alluvial land provide its most favored habitat.

Its stemless flower has three purple, brown or green (rarely yellow) petals which stand upright at the junction of the three strikingly mottled leaves. It is one of the earliest trilliums, often starting to bloom in January or February. 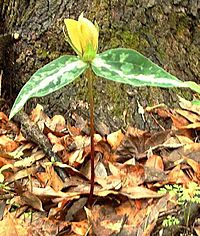 All content from Kiddle encyclopedia articles (including the article images and facts) can be freely used under Attribution-ShareAlike license, unless stated otherwise. Cite this article:
Chattahoochee River wakerobin Facts for Kids. Kiddle Encyclopedia.