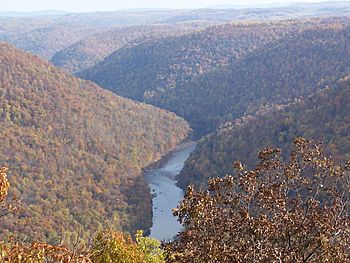 Cheat Canyon and the Cheat River from Cooper's Rock Overlook

Cheat Canyon — also called Cheat River Canyon or Cheat River Gorge — is a 10-mile (16 km) long, forested canyon of the Cheat River at the western edge of the Allegheny Mountains in northeastern West Virginia, United States. A popular whitewater venue, for many years the Canyon has been the object of controversy as environmental activists have contended with timber and development interests over its preservation status.

The remote Cheat Canyon was carved by the Cheat River and extends for about 10.5 miles between the towns of Albright in Preston County and Cheat Lake in Monongalia County, West Virginia. The steep forested slopes rise as much as 1,200 feet from the river bed to the Canyon rim.

The Canyon rim with its steep tributaries is composed of hard, white, grainy Pottsville sandstone. This forms the outcrops and cliffs along the rim which often break off to form talus fields that gradually slide down the forest slopes and pile up at the river bottom. Numerous caves have been formed by water in the Greenbrier Limestone of the lower strata of the Canyon walls.

The river in the Canyon features Class IV rapids (and Class V rapids at upper levels), making it a popular destination for whitewater kayaking and rafting. The toughest and most celebrated rapids are known as Big Nasty, High Falls, and Upper Coliseum. On the first weekend in May of every year, paddlers gather from many states to attend the Cheat Festival. A very popular whitewater race — The Cheat River Race — takes place in the Canyon on the Friday of that weekend. Unlike the overwhelming majority of whitewater races which employ a staggered start, this race uses a mass start (in which all participants start at the same time). For the first few miles, paddlers must avoid one another, in addition to the whitewater hazards that the river presents. The race, which typically attracts about 150 contestants, is often cited as the largest whitewater race in existence.

All content from Kiddle encyclopedia articles (including the article images and facts) can be freely used under Attribution-ShareAlike license, unless stated otherwise. Cite this article:
Cheat Canyon Facts for Kids. Kiddle Encyclopedia.