The green salamander (Aneides aeneus) is a species of lungless salamander in the family Plethodontidae. It and the Hickory Nut Gorge green salamander (A. caryaensis) are the only currently-described members of the genus Aneides that inhabit any areas in the eastern half of United States (all other Aneides salamanders are found west of the Mississippi River). Rarely seen in the field, the green salamander is an extremely habitat-specific species that is seldom found away from its preferred surroundings: moist, shaded rock crevices. 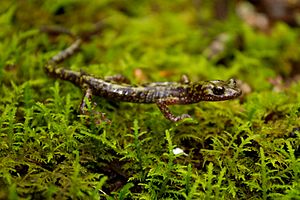 The green salamander is small and notably flat. Aneides aeneus‘ green, lichen-like blotches against a darker dorsum make it the only salamander in North America with green markings. A. aeneus possesses squared toe-tips, large, conspicuous eyes, and a light blue to yellow ventral surface. Adults range from 8–12 cm (3 to 5 in) with 14 to 15 costal grooves.

Aeneus was formerly considered the only species of the Aneides genus found in the Eastern United States. However, some claimed that there could be up to four different species of Aneides between the Cumberland Plateau and Blue Ridge Escarpment populations. A 2019 study found several A. aeneus populations to represent distinct taxonomic groups, supporting the presence of a possible species complex. At least one was found to represent a distinct species in its own right, the Hickory Nut Gorge green salamander (A. caryaensis). The subgenus Castaneides was created to contain all eastern species of Aneides, with caryaensis being the most basal member of the complex. Castaneides diverged from the Aneides hardii lineage between 27.2 and 32.3 million years ago.

Members of Castaneides are the only salamanders in North America with green markings. Due also to their hyper-specific habitat, they are almost unmistakable when found in the field.

Aneides aeneus is known to inhabit both the Alleghenies and Cumberland Plateau, reaching from southwestern Pennsylvania to northern Alabama and northeastern Mississippi. It is also commonly found in South-Central Ohio. Isolated populations are known at the Blue Ridge Escarpment at the junction of Georgia, North Carolina and South Carolina. The range of the Alleghenies and Cumberland Plateau extends southwest from Fayette County, Pennsylvania through eastern West Virginia, eastern Kentucky, the extreme western portions of Virginia, Tennessee, and Alabama. The population discovered in 1930 in the Great Smoky Mountains National Park has not been located since. There may be disjunct populations on Clinch Mountain, on Bays Mountain and the Appalachian Ridge and Valley, and in the Inner Central Basin of Tennessee (Redmond and Scott, 1996).

Aneides aeneus is an extreme habitat specialist. This species of Aneides is found almost exclusively in an environment following these guild-lines: A. aeneus prefers the crevices of rocks on the sides of cliffs or other outcroppings. Most crevices in which A. aeneus is observed, there is little to no sun light allowed in. This shade may be due to either vegetation outside of the crevice or outcroppings above the crevice. While a number of instances of Aneides aeneus observations in arboreal situations have occurred, most of these instances are in trees either adjacent to rock outcroppings and cliffs, or the specimen in question was located underneath the bark of the tree.

Males are extremely territorial toward other salamanders and would-be predators when disturbed or presented with any manner of threat. Cupp observed aggressive behavior in 45 of 49 instances where a male was placed within an artificial territory of another. Such a high level of aggression is rare in salamanders, and is observed in few other species, though hardly to the degree as observed in A. aeneus. This aggressive behavior, although in different forms, can also be observed in brooding of the female A. aeneus over her eggs. While the male A. aeneus will attack would-be invaders with such actions as butting, snapping, biting or snout-pressing, females will often snap at objects placed within the breeding crevice or near the eggs she guards.

Efforts aimed towards the conservation of such a secretive organism are proving complicated. While the fact that Aneides aeneus is such a habitat-specific salamander results in more vulnerability to habitat destruction, the cliffs and outcroppings it has chosen are relatively safe from harm. It has been speculated that A. aeneus inhabited the ancient chestnut forest that covered a large percentage of the Great Smoky Mountains National Park. It is not known whether or not A. aeneus utilized these trees more or less than its currently preferred habitat, but it is certainly a possibility. In Indiana, the green salamander is listed as an endangered species.

All content from Kiddle encyclopedia articles (including the article images and facts) can be freely used under Attribution-ShareAlike license, unless stated otherwise. Cite this article:
Green salamander Facts for Kids. Kiddle Encyclopedia.