Official reports cite the cave as being discovered in 1894 by Joseph Arnie, a local resident. The cave was first used for storing potatoes and, later, cheese. Homer Spencer established the Guler Cheese Co., which used the cave's constant 42 °F (6 °C) to 44 °F (7 °C) passage to age its cheese. The cheese company is now gone, but remnants of storage racks remain toward the north end of the cave.

Cheese Cave's natural entrance is located 246 feet (75 m) from the north end of the tube. The north cave entrance is in private property and has a building over the sinkhole. There is a steel staircase from the inside of the private building down to a small rock pile on the cave floor.

Toward the north end of the cave, remnants of wooden racks can be seen. 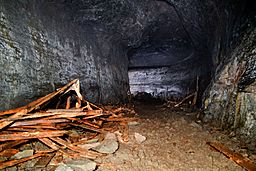 The south entrance has a low pavilion structure over the opening and a dirt parking area nearby. The opening is artificial and has a permanently placed ladder descending to a debris pile. The debris pile can be descended on foot, landing on a flat and clear cinder floor. The main length of the cave is mostly clear with occasional piles of fallen rock.

All content from Kiddle encyclopedia articles (including the article images and facts) can be freely used under Attribution-ShareAlike license, unless stated otherwise. Cite this article:
Cheese Cave Facts for Kids. Kiddle Encyclopedia.