Chelfham Viaduct is a railway viaduct built in 1896–97 to carry the Lynton and Barnstaple Railway (L&B) across the Stoke Rivers valley. Designed by L&B engineer, FW Chanter, and containing over a quarter of a million Marland bricks, its eight arches - each 42 feet (13 m) wide and 70 feet (21 m) high - meaning that the 132-yard (121 m)-long viaduct is the largest narrow gauge railway structure in England. Chelfham Viaduct was Bridge number 22 of the 80 that carried or spanned the railway over its 19-mile (31 km) length. The viaduct was classified as a Grade II listed structure on 25 February 1965. 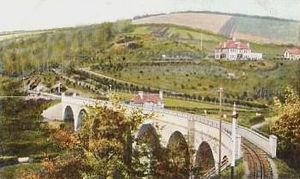 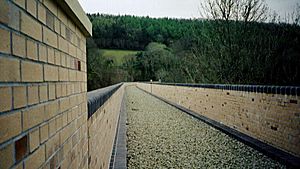 After the L&B closed in 1935, the rest of the trackbed, buildings and land from the line was sold at auction in 1938. The viaduct, however, was not sold. In 1943, it featured as a location in the war-time film The Flemish Farm, representing a Franco-Spanish border crossing. It is probable that such a redundant structure would normally have been dismantled, either then, or shortly afterwards during the Second World War, as happened to the smaller viaduct at Lancey Brook, which was destroyed as a demolition training exercise by the Army. However, a school and other buildings at its base made it uneconomical to dismantle, so it remained in Southern Railway ownership, passing to British Railways on the nationalisation of the railways in Britain in 1948, and in 2001, to BRB (Residuary) Ltd, formally a wholly owned subsidiary of the Strategic Rail Authority (now Network Rail). The residuary company was still owned by the UK Government, reporting to the Department for Transport. until, on 30 September 2013, The Highways Agency took over properties held and managed by BRB(R) prior to it being wound up.

The Highways Agency Annual Report for 2013-14 stated the following:

"The British Railways Board (Residuary) Ltd (BRBR) was wound-up on 30 September 2013. The ongoing functions of BRBR were subsequently dispersed to a number of successor bodies, including the Agency. From 1 October 2013, the Agency is discharging the Secretary of State’s responsibility for the maintenance and management of the BRBR Historic Estate which consists of over 3,400 tunnels, bridges, viaducts, culverts and other structures; plus around 230 public road supporting structures and 85 parcels of land associated with access to these structures.

The Historic Estate assets were transferred to the Secretary of State at nil value. These assets, together with any related contingent liabilities, are included in the Department for Transport’s accounts."

In 2000, the viaduct was extensively restored, including the fitting of a waterproof membrane to the deck, improvements to rainwater drainage, and restoration of the parapets, leaving the structure once again ready to carry rail transport. The project was funded by BRB and the Railway Heritage Trust. The Lynton and Barnstaple Railway Trust– which owns the nearby railway station – helped fund the restoration of the parapets and the upgrading of the waterproof membrane as part of long-term plans to reopen the line.

All content from Kiddle encyclopedia articles (including the article images and facts) can be freely used under Attribution-ShareAlike license, unless stated otherwise. Cite this article:
Chelfham Viaduct Facts for Kids. Kiddle Encyclopedia.