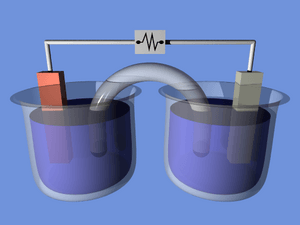 A demonstration electrochemical cell setup resembling the Daniell cell. The two half-cells are linked by a salt bridge carrying ions between them. Electrons flow in the external circuit.

A battery that is not recharageable will give electricity until the chemicals in it are used up. Then it is no longer useful. It can be rightly called 'use and throw'.

Batteries come in many shapes and sizes, from very small ones used in toys and cameras, to those used in cars or even larger ones. 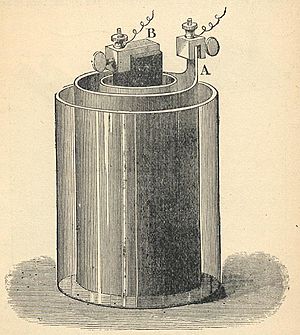 All content from Kiddle encyclopedia articles (including the article images and facts) can be freely used under Attribution-ShareAlike license, unless stated otherwise. Cite this article:
Chemical cell Facts for Kids. Kiddle Encyclopedia.