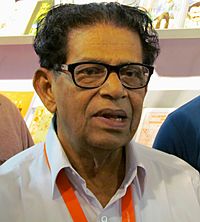 Chacko's first published poem was 'Munnottu' (Forward) in 1946. The poem 'Kanakaaksharangal' published in 1967 made him famous. Chemmanam was known for his satire poems inspired from social and political events/issues in India.

Chacko died on 14 August 2018, aged 92, at his home in Kochi, Kerala from cardiopulmonary arrest complicated by Parkinson's disease.

All content from Kiddle encyclopedia articles (including the article images and facts) can be freely used under Attribution-ShareAlike license, unless stated otherwise. Cite this article:
Chemmanam Chacko Facts for Kids. Kiddle Encyclopedia.