Melaleuca huegelii, commonly known as chenille honey-myrtle, is a plant in the myrtle family, Myrtaceae and is endemic to the south-west coastal areas of Western Australia. It has small, almost scale-like leaves and flower spikes sometimes more than 100 millimetres (4 in) long on the ends many of its branches.

The flowers are white, cream-coloured or a shade of pink and arranged in spikes on the ends of branches which continue to grow after flowering and sometimes also in the upper leaf axils. The spikes are up to 100 mm (4 in) long and sometimes longer, up to 25 mm (1 in) in diameter and contain up to 140 groups of flowers in threes. The petals are 1.5–3 mm (0.06–0.1 in) long and fall off as the flowers age. The stamens are arranged in bundles of five around the flower, with 6 to 13 stamens in each bundle. Flowering occurs between August and January and is followed by fruit which are woody, cup-shaped capsules 2.3–2.8 mm (0.09–0.1 in) long and wide in clusters along the stem. 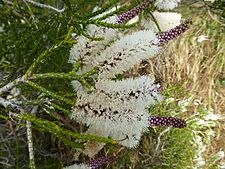 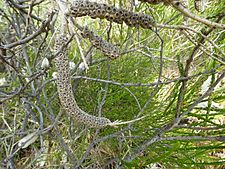 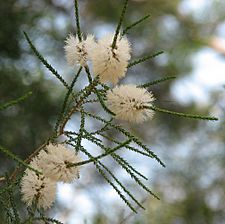 Melaleuca huegelii occurs along the coast of Western Australia from the Shark Bay district to the Augusta district. It occurs in coastal areas on limestone cliffs, dunes and plains.

This species is classified as "not threatened" by the Government of Western Australia Department of Parks and Wildlife although the subspecies pristicensis is classified as "Priority Three" meaning that it is poorly known and known from only a few locations but is not under imminent threat.

All content from Kiddle encyclopedia articles (including the article images and facts) can be freely used under Attribution-ShareAlike license, unless stated otherwise. Cite this article:
Chenille honey-myrtle Facts for Kids. Kiddle Encyclopedia.