Walkaway is a small town in the City of Greater Geraldton local government area of Western Australia. At the 2006 census, Walkaway had a population of 262.

Its name is a corruption of the native "Wagga wah", referring to the bend in the nearby Greenough River, and was originally given to the railway station when a line was built from Geraldton in 1887. In 1894 it was linked with Midland Junction by the building of a private line–that of the Midland Railway Company, constructed by an engineer and later the first General Manager of the Company, Edward Keane. With the railway and an expanding agricultural area, the township grew until with the dieselisation of the railway systems, and the take-over by the State of the Midland Railway in 1964, decline set in. This was also accentuated by the gradual absorption of the original smallholdings into the larger holdings of today's farming demands.

A number of renewable energy generation projects are located near Walkaway. Current projects (2014) produce 162 Megawatts of electrical power. Additional projects along with upgrades to current projects are scheduled for construction. The Midwest region is identified as a potential location for developing renewable energy technologies that include additional wind and solar photovoltaic electricity projects, solar thermal, geothermal, bioenergy, and ocean energy. 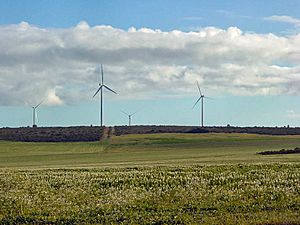 The Mumbida Wind Farm, 5 kilometres (3.1 mi) east of Walkaway, is a 55 MW renewable energy project developed by a joint venture of Verve Energy and Infrastructure Capital Group (ICG). Mumbida was completed in 2013 and is now fully operational. Mumbida Wind Farm utilises the 2.5 MW General Electric 2.5xl wind turbines, the first time that this model of wind turbine has been used in Australia. The Mumbida wind farm has been designed to be expanded to 85MW in the future.

The Greenough River Solar Farm is the first stage of a 40MW solar photo voltaic (PV) electricity generator. Stage 1 currently produces 10MW and was commissioned in 2012. At the time of commissioning, it was the largest solar PV generator in Australia. Construction of Stage 2 is scheduled to begin in 2014 and will add an additional 30MW to the project, located 30 kilometres (19 mi) east of Walkaway and 50 kilometres (31 mi) southeast of Geraldton, on the Walkaway-Nangetty Road.

All content from Kiddle encyclopedia articles (including the article images and facts) can be freely used under Attribution-ShareAlike license, unless stated otherwise. Cite this article:
Walkaway, Western Australia Facts for Kids. Kiddle Encyclopedia.