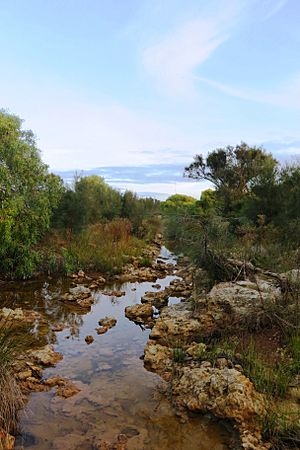 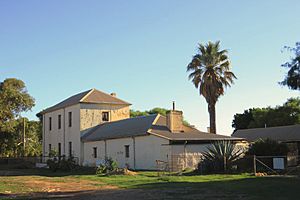 Greenough is a historical town 400 kilometres north of Perth, Western Australia and 24 kilometres south of Geraldton on the Brand Highway. The historic buildings are controlled by the National Trust of Australia. Another feature popular with tourists are the trees that are bent 90 degrees due to the coastal winds.

The mouth of the Greenough River is about 10 km to the north of the town.

The fertile land was once the home of the Yamatji people, who lived a fairly sedentary life, subsisting on fish and water fowl from the river mouth, shell-fish from the coast and game from the hills. They also cultivated ajeca, a yam-like plant on the river flats.

A popular camping ground was what is now known as "The Bootenal Springs". This is a permanent source of water and became a place of conflict between the Aboriginal people and the first European settlers. Although no evidence of the conflict remains, the site has since been interpreted to remind people of what took place.

The area was first explored by George Grey in 1839 after which he named the area after Sir George Bellas Greenough, the president of the Royal Geographical Society in London. Grey claimed that the area could become the granary of Western Australia.

In 1851 Augustus Gregory surveyed 30,000 acres (120 km²) of land in the region which became known as the Greenough Flats. This was subdivided into 20- and 30-acre (120,000 m2) lots with the view to encouraging English settlers who would be more used to the relatively small (by Australian standards) farm sizes. Within a few years it had developed into a highly successful wheat growing area with a population of over 1,000. Several community centres were created, notably North Greenough, Central Greenough (initially focused on Company Road between Gray's Store and the Hampton Arms Hotel), South Greenough and Bookara.

A series of disasters starting with a major cyclone in 1872 and major flooding in 1888 as well as the discovery of gold in the goldfields caused the gradual decline and abandonment of the settlement so that by 1900 many of the settlers had left the area, their small farmlets incorporated into larger farming properties. Substantial stone buildings, erected by the early colonists in anticipation of population growth, were underutilised or abandoned. During the course of the 20th century many of these buildings became derelict or fell into ruin. In the years following World War II, motorized transport, television and decline in religious observance caused local institutions to lose their relevance, resulting in the closure of local schools, churches, the Presentation Convent, and police complex. In 2016 the Anglican and Catholic Churches in Central Greenough are the only community institutions established in the 19th Century that continue to have an active membership. The Hampton Arms also continues to provide for the social needs of the community.

Following World War II, the historic heritage value of the Greenough Flats gradually came to be recognised. In 1966 the Geraldton Historical Society opened the first local history museum in the Mid West, in the former Maley family homestead at North Greenough. Soon after, the National Trust of Australia (WA) Inc. carried out a survey of heritage places in the region; the work being led by architect and planner Margaret Feilman. The National Trust also began acquiring historic properties on the Greenough Flats, many of which were gifted, with the object of ensuring their conservation. Almost the entire hamlet at Central Greenough was acquired, as well as nearby Clinch's Mill and the miller's residence, Greenough Hotel, Gray's Store, the Wesleyan Methodist Chapel, Temperance Lodge (ruin) and the Anglican Chapel at South Greenough. In the decades which followed, the National Trust invested substantial funds in these places' conservation, work which included the preparation of conservation management plans and archaeological research. The "Greenough Hamlet" has subsequently become a significant heritage tourism destination in the mid-west region. A new Visitor Information Centre was developed at the Greenough Hamlet around 2000.

In 2006, floodwaters on the Greenough River undermined and caused the collapse of one of the stone pylons of Maley's bridge in Central Greenough. The bridge, which is both historically significant and important for local vehicular movement, was subsequently restored.

In 2013, a disastrous fire gutted Maley's mill and store, one of Greenough's more significant heritage buildings.

Places of natural and cultural significance

Places marked NT are owned and/or managed by the National Trust. 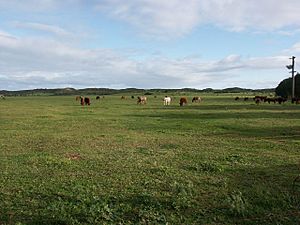 All content from Kiddle encyclopedia articles (including the article images and facts) can be freely used under Attribution-ShareAlike license, unless stated otherwise. Cite this article:
Greenough, Western Australia Facts for Kids. Kiddle Encyclopedia.