Dongara is a town 351 kilometres (218 mi) north-northwest of Perth, Western Australia on the Brand Highway. The town is located at the mouth of the Irwin River.

Dongara is the seat of the Shire of Irwin. At the 2016 census the shire had a population of 3,569, with 2,782 residing in the contiguous towns of Dongara and Port Denison. 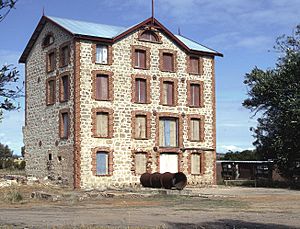 The place name 'Dongara' is an anglicised rendition of Thung-arra, the local Wattandee people's name for the estuary adjacent to the town, meaning 'sea lion place'.Dongara is a small place with less than 6000 people.

European settlement around the estuary began in 1853 when a harbourmaster, Edward Downes, was stationed there to look out for passing ships. He was employed by the Cattle Company which was establishing large pastoral stations about 15 kilometres inland. By the 1860s, ex-convict small farmers were occupying the local river flats, and a flour mill (the Irwin or Smith's Mill) was operating. A townsite was surveyed, and in 1871 it became the seat of a local council established that year (now the Irwin Shire Council), and site of a police station and public school. The Anglican Church of St John the Baptist and a Methodist Church were built in the 1880s.

In the 1890s, the larger Royal Steam Roller Flour Mill was built on the flats next to the new railway that connected the district to Perth, and the town was slowly developing, and although it was still a comparatively small village by the time of Federation in 1901, it had several churches, municipal offices and hall, a variety of shops, two hotels, a public school and a railway station. The nearby localities were populated by small wheat and sheep farmers, centred on the hamlets of Bookara, Irwin and Strawberry. There was also a small population of fishermen, including several Chinese men, at Port Denison.

Dongara is the center for a small oil and gas industry which began with the discovery of the Dongara Gas Field in 1966.

Notable people from or associated with Dongara

All content from Kiddle encyclopedia articles (including the article images and facts) can be freely used under Attribution-ShareAlike license, unless stated otherwise. Cite this article:
Dongara, Western Australia Facts for Kids. Kiddle Encyclopedia.