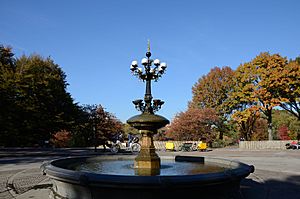 Cherry Hill Fountain is a water fountain in New York City's Central Park. It is located just to the west of Bethesda Fountain, enclosed in a circular plaza in Cherry Hill.

Designed by Jacob Wrey Mould and dedicated in the 1860s, the ornamental structure was originally designed as a watering trough for horses during the 19th century. The fountain consists of a granite dome and sculpted bluestone basin inset with Minton tiles. Crowning this 14-foot high tower are eight frosted round glass lamps and a golden spire.

In 1998, the Central Park Conservancy, along with a gift from Elizabeth and Clement Moore, restored the fountain back to an operable state.

All content from Kiddle encyclopedia articles (including the article images and facts) can be freely used under Attribution-ShareAlike license, unless stated otherwise. Cite this article:
Cherry Hill Fountain Facts for Kids. Kiddle Encyclopedia.