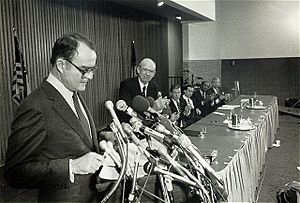 The commission was a signatory to the Chesapeake Bay Agreement of 1983, which was also signed by the governors of Maryland, Virginia and Pennsylvania; the Mayor of the District of Columbia; and the Administrator of the United States Environmental Protection Agency (EPA).

As of 2019, the chairman of the commission is Frank Wagner, State Senator of Virginia.

All content from Kiddle encyclopedia articles (including the article images and facts) can be freely used under Attribution-ShareAlike license, unless stated otherwise. Cite this article:
Chesapeake Bay Commission Facts for Kids. Kiddle Encyclopedia.