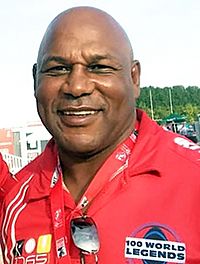 Chester Mornay Williams (8 August 1970 – 6 September 2019) was a South African rugby union rugby player. He played as a winger for the Springboks from 1993 to 2000. Williams also played rugby for the Western Province in the Currie Cup. He was born in Paarl, South Africa.

All content from Kiddle encyclopedia articles (including the article images and facts) can be freely used under Attribution-ShareAlike license, unless stated otherwise. Cite this article:
Chester Williams Facts for Kids. Kiddle Encyclopedia.