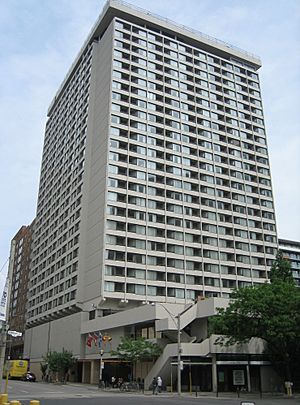 89 Chestnut Residence is a university residence operated by the University of Toronto, opposite the downtown Toronto DoubleTree hotel (formerly the Metropolitan Hotel) at 89 Chestnut Street. It was converted from the Colony Hotel in 2004 and turned into a student residence to accommodate the incoming double cohort in 2003 and 2004. It is located in downtown Toronto.

The building was originally constructed as a Motel 11 by the firm Armstrong and Molesworth, a discontinued brand of motels. When it opened in at the Holiday Inn Downtown 1972 it was the fourth largest hotel in the city, with 749 rooms. It cost some $18 million to build and was built on the site of many small buildings of what was then the centre of Toronto's First Chinatown. The hotel was purchased by Hong Kong investor Sally Aw for $73 million in 1989 and renamed the Colony Hotel. The hotel was later partly owned by Aw's listed company Sing Tao Holdings, via Singdeer Joint Ventures. Aw sold Singtao Holdings in 1999. The university purchased the hotel for C$67.6 million in 2003 from Global China Group Holdings (the new owner of ex-Sing Tao Holdings' media business) and other owner of the joint venture, at the height of a downturn in Toronto's hotel industry.

Prior to buying the hotel the University of Toronto had rented space to house 400 students at the Primrose Hotel at Jarvis and Carlton.

It has nearly 1000 residents from the University of Toronto and the Ontario College of Art and Design University. Until September 2008, it also accepted new applicants attending George Brown College and Ryerson University.

It has a conference centre and a revolving room on the 27th floor (opened as La Ronde restaurant in 1972 and now student lounge called The Lookout). It is the most expensive residence of all University of Toronto residences and has a reputation of providing luxurious accommodation and food. The university retained the hotel chef after purchasing it. Chestnut is also home to a larger number of international students than any other residence.

The Chestnut Residence Council is the student governing body for social, athletic and community affairs of the Residence. It organizes activities such as: the annual Chestnut semi-formal, coffee houses and open mic nights, ski and snowboarding trips, and intramural sports tournaments.

All content from Kiddle encyclopedia articles (including the article images and facts) can be freely used under Attribution-ShareAlike license, unless stated otherwise. Cite this article:
Chestnut Residence Facts for Kids. Kiddle Encyclopedia.