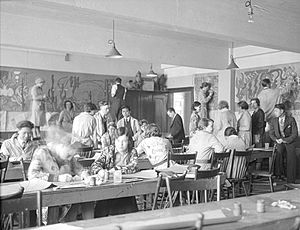 Inside a class at the Ontario College of Art in 1931.

The institution was established by the Ontario Society of Artists in 1876 as the Ontario School of Art, whose objective it was to provide professional artistic training, and further the development of art education in Ontario. The Ontario Society of Artists passed the motion to "draw up a scheme" for a school of art on 4 April 1876, and the first School of Art opened on 30 October 1876, funded by a government grant of $1,000.

In 1971–72, Roy Ascott radically challenged the pedagogy and curriculum structure of the College.

In 2008, OCAD president Sara Diamond changed the pedagogy. She emphasised academics over studio time and required full-time instructors to hold an advanced degree. There was some controversy as two faculty members resigned over the changes.

In an effort to better reflect its status as a university, the institution adopted the term university in its name, formally becoming the Ontario College of Art and Design University in 2010. In the same year, Tom Traves, then president of Dalhousie University in Halifax, conducted a confidential review of how OCAD was managed. He found that the number of senior faculty and administrators was excessive. Diamond adopted most of his 30 recommendations, including increased Decanal autonomy. OCAD University was awarded full degree awarding powers including honorary degrees on 1 July 2020 by the Government of Ontario. 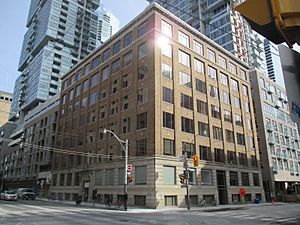 205 Richmond Street is one of three buildings that form OCAD's southern campus.

From 1952 to 1957 OCA was located at the Wood Manor at Bayview Avenue and Lawrence Avenue East.

The current OCAD campus consists of a north campus and a south campus. The north campus includes the Main Building and Sharp Centre for Design, the adjacent Butterfield Park, the Annex Building, the Rosalie Sharp Pavilion, the Student Centre, the Inclusive Design Institute, and the Continuing Education Centre. The south campus consists of buildings that are physically situated on Richmond Street West, plus the proposed Mirvish-Gehry development further south on King Street.

Buildings at OCAD are referred to by their street addresses. Some buildings are also assigned a building number that is encoded as the first digit in 4-digit room numbers.

The Main Building traces its roots to the first building that the school constructed, which was also the first building in Canada specially built for art education. Now known as the George A. Reid Wing, the building was designed by the school’s principal George A. Reid in the Georgian style and opened on 30 September 1921. On 17 January 1957, the first extension, a modernist building known today as the A. J. Casson Wing, was completed and was opened. Two more extensions to the building were subsequently added in 1963 and 1967. 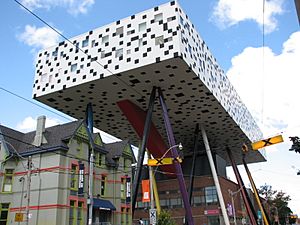 In 2000, funding was secured from Ontario’s SuperBuild program to build a fifth extension to the Main Building. Through Rod Robbie of Robbie/Young + Wright Architects, Will Alsop of Alsop Architects was made aware of the project and was eventually selected in 2002. A joint venture was formed between the two firms and the new extension, now known as the Sharp Centre for Design, was completed in 2004. The design, which came out of a process of participatory design, consists of a box four storeys off the ground supported by a series of multi-coloured pillars at different angles and is often described as a tabletop. The $42.5-million expansion and redevelopment has received numerous awards, including the first Royal Institute of British Architects Worldwide Award, the award of excellence in the "Building in Context" category at the Toronto Architecture and Urban Design Awards, and was deemed the most outstanding technical project overall in the 2005 Canadian Consulting Engineering Awards.

OCAD offers a Bachelor of Arts (Visual and Critical Studies).

In addition to research centres within the school itself, OCAD also belongs to a number of research networks, including:

Commercialization of research is supported by two incubators:

All content from Kiddle encyclopedia articles (including the article images and facts) can be freely used under Attribution-ShareAlike license, unless stated otherwise. Cite this article:
OCAD University Facts for Kids. Kiddle Encyclopedia.