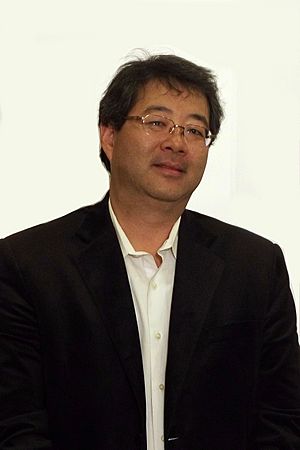 Chi Po-lin (December 27, 1964 – June 10, 2017) was a Taiwanese documentary filmmaker, photographer and environmentalist. He was best known for his 2013 movie Beyond Beauty: Taiwan from Above, which won Best Documentary at the 2013 Golden Horse Awards. He was born in Taipei.

On June 10, 2017, Chi died in a helicopter crash in a mountainous area in Hualien County's Fengbin Township at the age of 52. The group was shooting footage for the sequel to Beyond Beauty: Taiwan from Above, which was scheduled for release in 2019.

All content from Kiddle encyclopedia articles (including the article images and facts) can be freely used under Attribution-ShareAlike license, unless stated otherwise. Cite this article:
Chi Po-lin Facts for Kids. Kiddle Encyclopedia.