The Chicago flood occurred on April 13, 1992, when the damaged wall of a utility tunnel beneath the Chicago River opened into a breach which flooded basements and underground facilities throughout the Chicago Loop with an estimated 250 million US gallons (950,000 m3) of water. 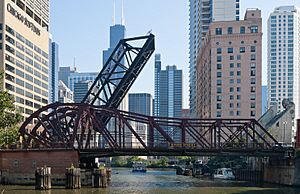 Rehabilitation work on the Kinzie Street Bridge crossing the Chicago River required new pilings. However, when the City of Chicago specified that the old pilings be extracted and replaced by the new ones, the Great Lakes Dredge and Dock Company reported back that the old pilings were too close to the Bridge Tender House, preventing proper removal without the risk of damaging or destroying the house. The City of Chicago then gave permission to install the new pilings 3.5 feet South from the old pilings. Unbeknownst to the crewmembers that began work at the site, beneath the river was an abandoned Chicago Tunnel Company tunnel that had been used in the early 20th century to transport coal and goods. One of the pilings on the east bank was driven into the bottom of the river alongside the north wall of the old tunnel. Although the pilings did not actually punch through the tunnel wall, the clay soil that was displaced by the piling eventually breached the wall, allowing sediment and water to seep into the tunnel. After some weeks, most of the clay between the water and the breach had liquefied which rapidly increased the rate of flooding in the tunnel. The situation became very serious because the flood doors had been removed from the old tunnels after they fell into disuse.

The water flooded into the basements of several Loop office buildings and retail stores and an underground shopping district. The city quickly evacuated the Loop and financial district in fear that electrical wires could short out. Electrical power and natural gas went down or were shut off as a precaution in much of the area. Trading at both the Chicago Board of Trade Building and the Chicago Mercantile Exchange ended in mid-morning, having a global effect, as water seeped into their basements. At its height, some buildings had 40 feet (12 m) of water in their lower levels. However, at the street level there was no water to be seen, as it was all underground.

It took three days before the flood was cleaned up enough to allow business to begin to resume and cost the city an estimated $1.95 billion. Some buildings remained closed for a few weeks. Parking was banned downtown during the cleanup and some subway routes were temporarily closed or rerouted.

All content from Kiddle encyclopedia articles (including the article images and facts) can be freely used under Attribution-ShareAlike license, unless stated otherwise. Cite this article:
Chicago flood Facts for Kids. Kiddle Encyclopedia.