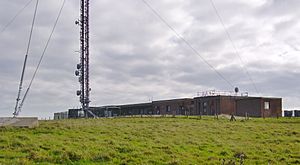 The Chillerton Down transmitting station is a broadcasting facility for FM and DAB radio at Chillerton Down, above the village of Chillerton on the Isle of Wight off the south coast of England . The transmitter was erected in 1958 and uses a 228.9-metre (751 ft) high guyed steel lattice mast of triangular cross section as an aerial.

It was originally used to transmit Southern Television, and later TVS, until the end of VHF television transmissions in the UK at the beginning of 1985. It now transmits Wave 105, 103.2 Capital FM, Greatest Hits Radio, Isle of Wight Radio, the local Arqiva (NOW S. Hampshire) DAB multiplex and the national Digital One DAB multiplex.

The site is owned and operated by Arqiva.

VHF analogue television was transmitted from Chillerton Down from its launch in 1958 until the nationwide shutdown of VHF signals in 1985.

All content from Kiddle encyclopedia articles (including the article images and facts) can be freely used under Attribution-ShareAlike license, unless stated otherwise. Cite this article:
Chillerton Down transmitting station Facts for Kids. Kiddle Encyclopedia.