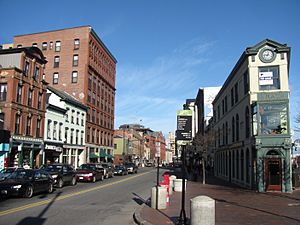 Congress Street was once the center of a "vibrant" Chinatown

Chinese-Americans in Portland, Maine refers to the Chinese-American residents and businesses of Portland, Maine, USA. An informal and small Chinatown once existed around Monument Square. The first Chinese person arrived in 1858 with the Chinatown forming around 1916, mainly lasting until around 1953. The last vestiges of Chinatown lingered until 1997 when the last Chinese laundry closed. By that time, urban renewal already claimed all of the remaining buildings.

Portland's Chinatown existed modestly, with most Chinese being isolated due to discrimination and the Chinese Exclusion Act of 1882. By 1895, there were enough Chinese people that a Chinese community began to form, though mostly with men whose wives were prohibited from migration due the newly created law. The first Chinese restaurant opened in 1880 at 1 Custom Wharf House. At the time the city only had nine Chinese men. The community celebrated their first Moon Festival on October 8, 1884. Most Chinese men who lived in Chinatown attended a Chinese church with some going to China as missionaries. In 1903, a laundromat union of 100 Chinese owners formed to fix prices. By 1920, around 30 Chinese laundries existed in the city. By around the 1950s, the Chinese community had shrunk to the point that Chinatown almost ceased to exist. By 1997, the last laundry was demolished, wiping out the last remaining vestige of Chinatown.

All content from Kiddle encyclopedia articles (including the article images and facts) can be freely used under Attribution-ShareAlike license, unless stated otherwise. Cite this article:
Chinese-Americans in Portland, Maine Facts for Kids. Kiddle Encyclopedia.