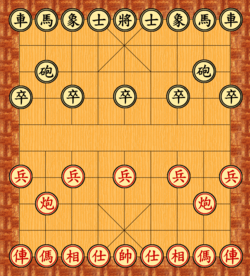 Xiangqi board with pieces in their starting positions

Xiangqi is a form of chess that started in China. In English it is called Chinese chess.

Though derived from the original Indian Chaturanga, Chinese chess is quite different from modern international chess. The board is different, there are different pieces, and they have different moves. The general and his mandarin may not leave the nine-pointed fortress; they have only limited movement. Clearly, this is more similar to the old Indo-Arabic game than to modern chess.

Xiangqi is a chess game for two people to play. Each player has 16 pieces to move on the board. One player's set is red, and one is black. The way to win is to kill the other player's Jiang (Shuai). Each kind of piece has different ways to move. Xiangqi is one of the most popular chess games in China.p78

All content from Kiddle encyclopedia articles (including the article images and facts) can be freely used under Attribution-ShareAlike license, unless stated otherwise. Cite this article:
Chinese chess Facts for Kids. Kiddle Encyclopedia.