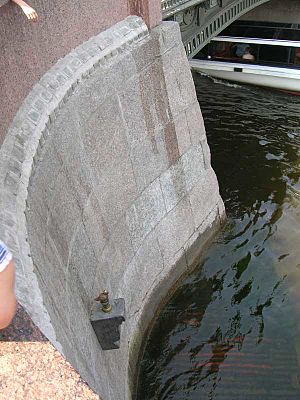 The statue of Chizhik-Pyzhik near the First Engineer Bridge

"Chizhyk-Pyzhik" (Russian: Чи́жик-Пы́жик) is a Russian folk song which runs as follows:

Chizhik-Pyzhik, where've you been?
Drank vodka on the Fontanka.
Took a shot, took another –
Got dizzy.

The origin of the song in unclear. According to one urban legend, the rhyme refers to the students of the Imperial School of Jurisprudence, who frequented a pub belonging to the merchant Nefedov on the Fontanka Quay in Saint Petersburg. The school was founded by Duke Peter of Oldenburg in the nearby house #6. The students of the college wore uniforms with yellow and green colors, which resembled the colors of the bird called the siskin (Russian: чиж, chizh; hypocoristic: Russian: чижик, chizhik), and hats from fur of young reindeer (Russian: пыжик, pyzhik). Because of that, they were nicknamed Chizhiks-Pyzhiks.

Its extremely simple melody (mi-do-mi-do-fa-mi-RE, sol-sol-sol-(la-ti)-do-do-DO) is suitable for teaching small children to play piano (with a suitable "nursery" lyrics).

In 1994, the municipal authorities of St. Petersburg installed a bronze statue of Chizhik-Pyzhik just opposite the former School of Jurisprudence. The statue perches on a ledge in the embankment, in the proximity of the First Engineer Bridge.

The statue was designed by Georgian screenwriter and director Revaz Gabriadze, and it is one of the smallest statues in Saint Petersburg. Its height is 11 centimeters and weight about 5 kilograms.

The statue was stolen on at least three occasions, the last time in 2003, obviously for the purpose of its subsequent remelting. This prompted the city authorities to toy with the idea of replacing it with a statue made of granite or marble, which would make thefts less lucrative.

All content from Kiddle encyclopedia articles (including the article images and facts) can be freely used under Attribution-ShareAlike license, unless stated otherwise. Cite this article:
Chizhik-Pyzhik Facts for Kids. Kiddle Encyclopedia.