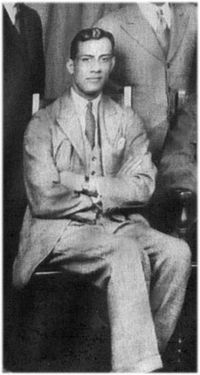 Chaudhry Rehmat Ali as a young man at Cambridge University

In Pakistan he has considerable importance. His articles are taught in the course books of Pakistani schools

All content from Kiddle encyclopedia articles (including the article images and facts) can be freely used under Attribution-ShareAlike license, unless stated otherwise. Cite this article:
Choudhary Rahmat Ali Facts for Kids. Kiddle Encyclopedia.