Sharma was born and raised in Santa Cruz, California, the son of Gita Jahn and Bob Sharma. Contrary to some reports, Chris Sharma is not of Indian origin. His parents were devotees of the yogi Baba Hari Dass, and adopted the surname Sharma when they got married. He started rock climbing when he was 12 at the Pacific Edge climbing gym. Sharma went to Mount Madonna school and attended Soquel High School for one year.

At age 14, Sharma won the Bouldering Nationals. A year later, he completed the first ascent of Necessary Evil 5.14c (8c+) in the Virgin River Gorge, the highest-rated climb in North America at the time.

Sharma then moved to Bishop, California, where he climbed The Mandala, a boulder problem graded V12.

In July 2001, Sharma completed the extension of the established route Biographie in Ceüse, located in the Hautes-Alpes Department of France and renamed it Realization, ignoring the French tradition that equippers and not climbers name routes. At the time of the first ascent, Biographie was widely considered to be the first consensus 5.15a (9a+) in the world. He has since established or completed many routes at or above 5.15 (9a+), including La Rambla and Es Pontas (a deep water soloing project in Mallorca). In 2008 Sharma climbed the 250-foot line (76 m), Jumbo Love, at Clark Mountain in California, claiming 5.15b (9b) for the grade.

The 2008 film follows Chris through various climbs throughout the world and offers his reflections of his past, climbing and life.

Sharma stated in 2013 that after Jumbo Love he felt something needed to change - that he had climbed routes set out by others, including 5.15b, and yet felt his limits had not been tested. He climbed a number of other 5.15b routes (Golpe de Estado, Neanderthal and Catxasa), each a project in itself, in order to understand what a route might feel like, which was beyond these, and began to search for climbs harder than these, which would "change him" and which had not yet been recognized. In 2007 he had moved to Lleida, a town close to the Spanish Pyrenees, in Catalonia, Spain. He found an answer in the nearby hard limestone cliffs of Oliana, where he developed several 5.14+ and 5.15 routes over the next five years.

By 2013, Sharma had spent considerable time attempting La Dura Dura - an Oliana climb he described as "horrifyingly" difficult and perhaps "not for me", and had built up a close connection with Adam Ondra, then about 20 years old and seen as the outstanding climber of the next generation. Sharma gave guidance to Ondra, and in turn felt motivated to work harder, by working on routes jointly with him. On March 23, 2013, just short of his 32nd birthday, Sharma completed the climb of La Dura Dura.

In 2013, Sharma opened his own gym Sender One Climbing, located in Santa Ana, California.

In August 2015 he married his fiancée, Jimena Alarcón, and after living for years in Oliana (Spain), he moved to Barcelona (Spain). Three months later, he opened a new gym there called Sharma Climbing BCN

V12 (8A+) (possibly harder when climbed by Chris Sharma): 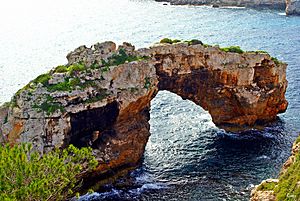 Es Pontàs, a natural arch in the coast of Mallorca

All content from Kiddle encyclopedia articles (including the article images and facts) can be freely used under Attribution-ShareAlike license, unless stated otherwise. Cite this article:
Chris Sharma Facts for Kids. Kiddle Encyclopedia.