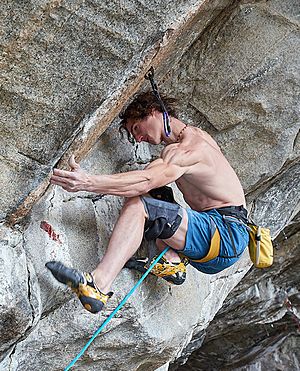 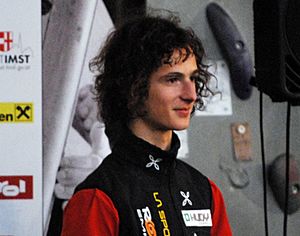 Adam Ondra (born February 5, 1993) is a Czech professional rock climber, specializing in lead climbing and bouldering. Rock & Ice magazine described Ondra in 2013 as a prodigy and the leading climber of his generation. Ondra is the only male athlete to have won World Championship titles in both disciplines in the same year (2014), and he is also the only male athlete to have won the World Cup series in both disciplines (lead climbing in 2009, 2015 and 2019, and bouldering in 2010 and 2021).

All content from Kiddle encyclopedia articles (including the article images and facts) can be freely used under Attribution-ShareAlike license, unless stated otherwise. Cite this article:
Adam Ondra Facts for Kids. Kiddle Encyclopedia.