Christ's Church Cathedral, the cathedral church of the Anglican Diocese of Niagara, is located at 252 James Street North, in Hamilton, Ontario, Canada. The parish was established in 1835, with construction for the present building taking place from 1852 to 1873. The cathedral has gone through several expansions and renovations since its opening in 1876.

In 2003 the dean performed an irregular wedding for a lesbian couple while the national church was debating the issue of blessing of same-sex unions (as it continues to do) and without the diocesan synod having reached any conclusion on the matter, provoking censure by the bishop. (The diocesan synod did subsequently approve blessing of same-sex unions in 2004 though the bishop withheld his consent notwithstanding which the local Roman Catholic diocese withdrew from an annual service with the Anglicans and Lutherans to renew and reaffirm recognition of one another's baptismal vows.) It is considered a gay-friendly parish and Integrity, an Anglican/Episcopalian gay and lesbian organization, conducts monthly worship services in the cathedral.

The building has an unusual construction history. Originally a stuccoed wooden Palladian-Baroque structure designed by Robert Charles Wetherall, it was incrementally transformed into stone Decorated Gothic, initially to an 1848 design by William Thomas, with Thomas's chancel and the first two bays of his nave being added to Wetherall's existing wooden church, the resulting hybrid being dubbed "the humpback church." The stone gothic nave was completed to a further design by Henry Langley (the architect of some 70 Ontario churches) in 1876, the original wooden portion having been demolished in 1872 to clear room for it and, inter alia, the chancel extended in 1924–25.

Meanwhile, Thomas, in a state of indignation over the perverse use to which the Anglicans had put his design, took it to the Presbyterians, who built the still-standing St Paul's Church to Thomas's plan for Christ's Church. 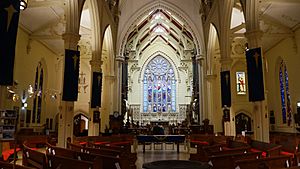 Stained-glass windows behind the altar of the cathedral

All content from Kiddle encyclopedia articles (including the article images and facts) can be freely used under Attribution-ShareAlike license, unless stated otherwise. Cite this article:
Christ's Church Cathedral (Hamilton, Ontario) Facts for Kids. Kiddle Encyclopedia.