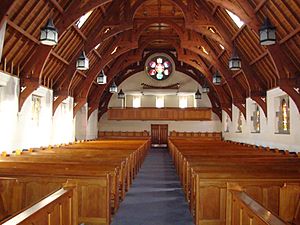 The chapel was designed by Robert Speechly and was built in 1867. Its simple style was in harmony with Christ's College Big School, which is four years older. The chapel was extended in 1884 to a design by Benjamin Mountfort, who added transepts and a chancel; an earlier design by William Armson was rejected. In 1888, a Mountfort-designed organ chamber was added.

The chapel more than doubled in size in 1955 based on a design by Paul Pascoe, who did not interfere with the Gothic Revival appearance of the school's quadrangle.

The chapel was used for the funeral service for Christchurch architect Peter Beaven in June 2012.

The chapel was registered as a heritage building by the New Zealand Historic Places Trust on 27 June 1985 with registration number 3277 classified as A. With the change of the classification system, the building later became a Category I listing.

All content from Kiddle encyclopedia articles (including the article images and facts) can be freely used under Attribution-ShareAlike license, unless stated otherwise. Cite this article:
Christ's College Chapel Facts for Kids. Kiddle Encyclopedia.