Christ's College, Christchurch is an independent Anglican secondary day and boarding school for boys, located in the city centre of Christchurch, New Zealand.

Founded in 1850 by Reverend Henry Jacobs in Lyttelton as a school for early settlers, College is the oldest independent school in the country. The college currently caters for approximately 647 students from Year 9 to Year 13.

Christ's College is an International Member of The Headmasters' and Headmistresses' Conference (HMC). The Headmasters' and Headmistresses' Conference (HMC) represents the Heads of the leading independent schools in Ireland and the United Kingdom and International schools mainly from the Commonwealth. Christ's College is one of only three member schools in New Zealand. 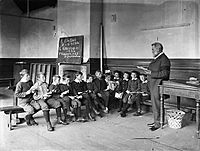 Pupils of the Lower School with Schoolmaster Mr Wiggins, circa 1903 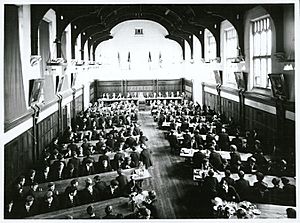 Christ's College (formerly Christ's College Grammar School) was established in 1850 and directly modelled on the pedagogic vernacular of English public schools, such as Eton College and Radley College. The school was most likely named Christ's College by James FitzGerald, Canterbury's first Superintendent, after his old College at Cambridge (Christ's College, Cambridge). At its foundation, the school was run from two rooms at the immigration barracks at Lyttelton, and the emphasis was on a classical education, including Greek and Latin, Modern languages, Mathematics, English, History and Geography. Students were also expected to conduct scientific experiments, to draw and sing. It used to be closely associated with the Lyttleton Collegiate Grammar School which was also located in the Lyttleton Immigration Barracks.

The school left Lyttelton in 1852 and moved over the hill to the St Michael's parsonage in Oxford Terrace with 16 students. Henry Jacobs, the first headmaster, ensured that his school enabled both boarders and day boys to attend.

Christ's College moved to its present site in 1856, with 35 pupils and a staff of three. This location, adjacent to the Government Domain (now Hagley Park), provided the college with room to expand, and the school gradually began to acquire additional buildings. The first of these building were wooden, providing homes for the staff and their families and an increasing number of boarders. By 1863, Big School, the first of the stone buildings, had been built on the west side of the quadrangle in which all classes were taught (in present-day it is the school's library with additions by Sir Miles Warren and currently the oldest educational building still in use in New Zealand), followed in 1867 by the Chapel. The school developed slowly around this central quadrangle, and today the 'quad' is treated with reverence, and therefore students are not permitted to walk on it, only staff members and permitted visitors. The Cathedral Grammar School used to be the Lower School of Christ's College when it struggled financially from 1895 to 1922.

In its early days, the College taught boys as young as six, with each boy arriving with a different level of education. Subsequently, there was a wide age range in many classes and, until the number of classrooms increased, they were all taught together. 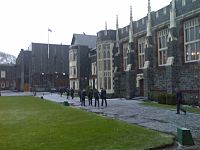 In the original survey of central Christchurch (known as the Black Map), which was undertaken in 1850, it was envisaged for Christ's College and ChristChurch Cathedral to be built adjacent to one another in Cathedral Square, modelled on Christ Church, Oxford. The area set aside for the college in Cathedral Square, 3 acres 1 rood and 3 perches (13,230 m2), was found to be insufficient. In a meeting in June 1853 between Henry Sewell, Henry Jacobs, Rev. Robert Bateman Paul, and Thomas Cass, Sewell took the group for a visit of a site earmarked as the Government Domain (i.e. botanical gardens). The group agreed on the site, subject to approval by Bishop Selwyn, which was later obtained. Years later, this land transaction was formalised through The Cathedral Square Ordinance 1858, a law passed by the Canterbury Provincial Council in October 1858. The compensation paid for the transfer of land to the Provincial Council was £1,200, but with 10 acres (40,000 m2), the college was also given a much larger piece of land.

The Christ's College grounds have a collection of nineteenth century, and turn-of-the-century buildings, as well as newly built buildings such as the Old Boys Theatre and the Fine Arts Building. The neogothic style is dominant, as was the case for most notable colonial-period buildings in Christchurch, such as the Cathedral, and the original buildings of Canterbury University (formerly Canterbury College), which is now the Christchurch Arts Centre. 'Big School', built in 1863, is the original classroom for the Christchurch site of the school, and is one of the oldest surviving buildings of its type in New Zealand. 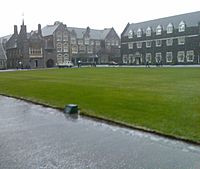 College House was created as part of Christ's College in 1850. According to College House:

[Christ's College] was instrumental in the establishment of Canterbury University in the early 1870s.

The upper department became a residential college of the university after it was founded, and soon it was referred to as College House. The upper and lower departments (tertiary and secondary departments) separated in 1957, and College House became independent. 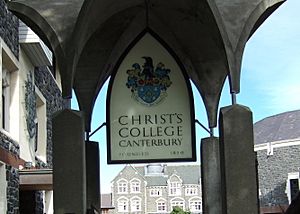 Christ's College Entrance, Administration block to the left, Old Boys' Theatre to the right and School House in the centre background 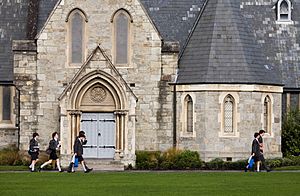 The chapel is an integral part of the school with compulsory religious education being undertaken until Year 11. Every Wednesday congregational practice takes place, in which the whole school sings, and practises hymns, psalms, prayers and chapel routine. Boys are also required to attend chapel on Monday and Friday mornings and usually alternative Sundays, even if it coincides with their own church service outside the school. The school chapel service takes priority and compulsory two services each term are required. Parents and family are welcome to attend Sunday chapel. Music is an integral part of school life, the Christ's College Chapel Choir consists of approximately eighty boys though changes yearly with the incoming year 9 group and leaving year 13's. The choir sings at chapel services, public and private events and takes part in several singing competitions such as the Big Sing, and in 2007 the international Summa Cum Laude Festival in Vienna (attaining second place).

The school offers students NCEA Levels 1, 2, 3 and scholarship examinations through NZQA. However, in some cases Cambridge Mathematics Examinations are also offered. There are many academic disciplines offered at the school as subjects, varying from the standard English and mathematics to French, drama, classical studies, physical education, art history, sciences and many other subjects. Subjects like English and Mathematics are a compulsory up to year 11. Year 9 and 10 classes consist of a wide array of subject to introduce students to different subject to see what they enjoy before having to select subjects in year 11 which go towards NCEA level 1.

There are opportunities for all boys to be involved with the performing arts, with a Junior and Senior production each year, an annual inter-house play festival and more; in fact, over half the college population is involved in drama each year.

Saturday activities have been compulsory for those who do not have games on this day since Saturday morning classes were abolished. There is an extensive list of activities to choose from in 2009; this included archery, mountain biking, pool activities and scuba diving, rock climbing, Spanish, theatre sports, tennis, video production, workshop and weight training. Extra tuition has been available in art, biology, chemistry, physics, calculus, drama, economics, English, German and music.

Sport is compulsory for all boys; there is an extensive selection of sports available with boys choosing both a summer and winter option each year. As well as school sports, there are ongoing inter house sporting competitions in which all boys are encouraged to participate. Extra sporting activities are also available: for example, the school ski club buses to the ski fields on weekends during winter terms. Sports facilities on site include Upper the school playing field, an all weather facility, a 5-lane indoor 25-metre heated swimming pool, gymnasium and weights room. Offsite facilities include the nearby Christ's College cricket ground (which also has football and rugby fields) which consists of four hectares of South Hagley Park, and Kerr's Reach on the Avon River which is home to the Christ's College rowing club, consisting of a boat house which houses top quality rowing equipment. It is claimed that a form of rugby was being played at the school as early as 1853. Each year its rugby team plays with Wanganui Collegiate School, Wellington College and Nelson College in a tournament known as the "Quadrangular". It also has a long-running rivalry with Christchurch Boys' High School, and an annual rugby match between the two schools is fiercely contested. 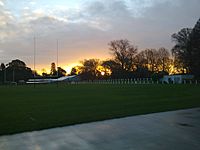 In keeping with the tradition of English public schools, Christ's College has ten Houses accommodating around 650 students. There are three boarding houses and the dayboys are organised into seven more houses. Each house has a housemaster responsible for the care of the boys.

From the school's early days, Houses were a base for boarders within the school, and these changed their names as Masters came and went. The name Jacobs has been retained, while others have been replaced by School, Richards and Flower's. It was not until 1909 that the first two day-boy Houses were established. They were named 'North Town' and 'South Town', and students were allocated to them depending on whether their homes were north or south of Gloucester Street. In 1924, these Houses were named Harper and Julius – Condell's, Corfe, Rolleston and Somes have also been added over the years.

The year groups within the Houses are encouraged to build House spirit and to compete in sporting and cultural competitions. Cricket and football games were established as soon as there were enough boarders to compete against each other, and gradually music and drama competitions have been added.

Houses for dayboys provide a place for study and recreation, a Common Room, showers and changing facilities, and areas for storing books and sports clothing. Boys meet here at the beginning of each day for House Assembly where they receive notices for the day and reminders of forthcoming events to prepare for from their Housemaster.

In the boarding environment, the facilities and support systems are more comprehensive. Assisting the Housemaster are an assistant housemaster, a matron, and two live-in tutors who are also studying at university. Most of the school facilities, such as the library, computer room, gymnasium, pool, music and art rooms, and the workshop, are open for use by boarding boys out of school hours. Evening activities during the week include set times for homework, but recreational activities are also encouraged.

The Christ's College Boarding Programme keeps boarders busy in the weekends. With age-appropriate activities tailored to each year group's needs, boarders are given a number of opportunities that may not be available to dayboys. 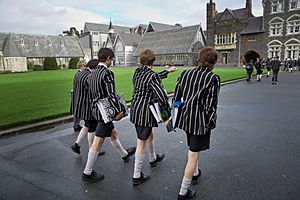 The black and white striped blazers and ties Christ's College boys wear are instantly recognisable and well known especially within Christchurch. There are two types of appropriate uniform – Sport's Uniform, Dress Uniform (known by the boys as stripes or suits). During Winter terms dress uniform is worn on Mondays and Fridays, and sports uniform is worn on Tuesday, Wednesdays and Thursdays. Dress uniform is required for chapel services and other formal occasions. A high standard of dress is expected at all times and boys are punished for incorrect or incorrectly worn uniform, boys must always wear their blazers when in town, even with summer uniform.

Each house has a different uniform for inter house sporting events and is made up of a rugby jersey or singlet in the house colour and black or white shorts, depending on the house. Each different sport also has its own uniform for games, a tracksuit consisting of black pants and a black tracksuit top with College crest is required for travelling to and from games venues and for field trips where the uniform of the day is not suitable.

The Christ's College governing body comprises a chairman, Warden and Fellows. The Bishop of Christchurch is ex officio Warden.

All content from Kiddle encyclopedia articles (including the article images and facts) can be freely used under Attribution-ShareAlike license, unless stated otherwise. Cite this article:
Christ's College, Christchurch Facts for Kids. Kiddle Encyclopedia.