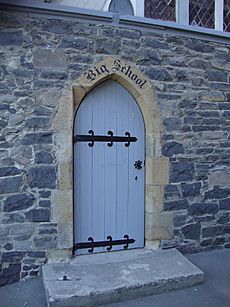 Even before the first settlers came out to Canterbury on the First Four Ships, James FitzGerald had designed what became known as Big School in 1850 back in England as part of the settlement planned by the Canterbury Association. The Canterbury Provincial Council, of which FitzGerald had been the first Superintendent (1853–1857), voted £1,000 for the construction of Big School. The building was constructed in 1863 and was the school's first stone building. It is the only building known to have been designed by FitzGerald.

The building was registered as a heritage building by the New Zealand Historic Places Trust on 7 April 1983 with registration number 48 classified as A. With the change of the classification system, the building later became a Category I listing.

The design of the building is relatively simple. Prior to the 1989 extension, the plan was a rectangle. From the quadrangle, the viewer sees solid buttresses, rows of lancet windows and a steeply pitched roof. The roof pitch allowed for the heavy snow falls that the Canterbury Association wrongly expected in Canterbury. The pattern in the roof tiles is believed to have been added in 1896. While in use as a school, the interior was gloomy, according to a 21st-century source, as the windows were whitewashed.

All content from Kiddle encyclopedia articles (including the article images and facts) can be freely used under Attribution-ShareAlike license, unless stated otherwise. Cite this article:
Christ's College Big School Facts for Kids. Kiddle Encyclopedia.