The Christchurch Town Hall, since 2007 formally known as the Christchurch Town Hall of the Performing Arts, opened in 1972, is Christchurch, New Zealand's premier performing arts centre. It is located in the central city on the banks of the Avon River overlooking Victoria Square, opposite the former location of the demolished Christchurch Convention Centre. Due to significant damage sustained during the February 2011 Christchurch earthquake, it was closed until 2019. Council staff initially recommended demolition of all but the main auditorium, but at a meeting in November 2012, councillors voted to rebuild the entire hall. In 2020, the town hall was registered as a Category I heritage building.

The first Town Hall in Christchurch was built on the corner of Hereford Street and Cathedral Square, from where one would look down Sumner Road (since renamed High Street). The verandah was used as hustings for elections. 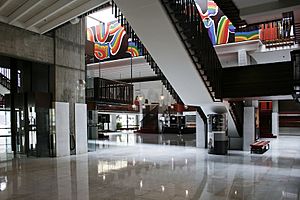 Foyer of the Christchurch Town Hall

The current building was part of an envisaged civic centre for Christchurch. Part I, the Christchurch Town Hall, was opened on 30 September 1972 by the Governor General, Sir Denis Blundell. The project was carried out by the then six metropolitan territorial local authorities, i.e. Christchurch City Council, Paparua and Heathcote County Councils, Riccarton and Lyttelton Borough Councils, and Waimairi District Council. Five of these local authorities were amalgamated in the 1989 local government reforms, and Lyttelton became part of Christchurch in March 2006, hence Christchurch City Council has sole responsibility for the venue these days.

Part II, new civic offices as a replacement for the Civic in Manchester Street, to be built on the corner of Kilmore and Durham Streets, cutting Victoria Street off from going through Victoria Square, was not built. Instead, the Christchurch City Council purchased Miller's Department Store in Tuam Street in 1978 and fitted this building out as the new civic offices, occupying the building in 1980. A hotel stood in the place that was set aside for the civic offices across Victoria Street.

The Christchurch Town Hall of the Performing Arts was designed for the presentation of a wide range of activities including orchestral concerts and recitals, opera, ballet and dramatic productions, musical comedy, variety, folk, rock and jazz concerts, conventions and conferences. It was designed by Sir Miles Warren and Maurice Mahoney of Warren and Mahoney Architects with acoustic assistance from Professor Harold Marshall.

It hosts many civic functions, local cultural and commercial events, shows, and concerts. It is home to the Christchurch Symphony Orchestra, the Christchurch City Choir and several theatrical amateur groups.

It has a 2,500-seat auditorium known for its acoustics and the 1,000 seat James Hay Theatre. The Town Hall has several rooms that complemented the Christchurch Convention Centre, but the venue on the opposite side of Kilmore Street was demolished in March / April 2012.

The Rieger pipe organ is also in the Christchurch Town Hall of the Performing Arts Auditorium and the curator is international concert organist Martin Setchell.

It also has the Limes Room, Cambridge Room and two Conference Rooms which are used for various functions and conferences.

On the ground floor of the complex is Boaters Restaurant, which is run by the Christchurch Polytechnic Institute of Technology as a training venue for the hospitality industry.

Frontview of the Christchurch Town Hall in August 2019

The Town Hall was closed as a result of significant damage caused by the February 2011 Christchurch earthquake from liquefaction and the related lateral spreading of the ground towards the Avon River. In June 2011, an assessment of the building was underway to determine the extent of the damage. In October 2012, a staff report recommended that only the main auditorium be saved, with the rest of the building to be demolished.

On 22 November 2012, Christchurch councillors voted unanimously to rebuild it at a cost of $127.5 million, only $68.9 million of which would be covered by insurance. Earthquake Minister Gerry Brownlee could still however veto the plan. In August 2013, council staff presented four options to city councillors that would all retain the building, at a cost of around NZ$125m.

On 11 June 2015 confirmation was given by the Christchurch City Council on the decision for the repairs of the Christchurch town hall to go forward. Work started in November 2015 with the foundations, which will be replaced; new concrete columns will be installed into the ground to help support and stabilise the building. The project will also add improvements to the town hall's design – for instance, the James Hay theatre, main auditorium, and restaurant will be modified to fix issues present in the original layout.

The restoration was initially expected to be completed mid-2018, but the first part did not officially open until February 2019.

On 4 September 2020, the town hall was designated a Category I Historic Place by Heritage New Zealand, reflecting the building's "outstanding international and national significance". Since the early 2000s, there has been an effort to recognise modernist architecture and the town hall is an exemplar of a brutalist building.

All content from Kiddle encyclopedia articles (including the article images and facts) can be freely used under Attribution-ShareAlike license, unless stated otherwise. Cite this article:
Christchurch Town Hall Facts for Kids. Kiddle Encyclopedia.