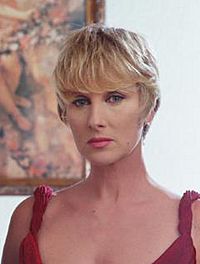 Adela Christian Bach Bottino (May 9, 1959 – February 26, 2019) was an Argentine-Mexican actress and producer of telenovelas. She was married to Mexican actor Humberto Zurita. She had two children Sebastián Zurita and Emiliano Zurita. She was born in Buenos Aires. Bach was known for her roles in Bodas de odio, De pura sangre and El secreto.

All content from Kiddle encyclopedia articles (including the article images and facts) can be freely used under Attribution-ShareAlike license, unless stated otherwise. Cite this article:
Christian Bach Facts for Kids. Kiddle Encyclopedia.