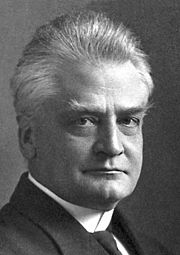 Christian Lous Lange (September 17, 1869 – December 11, 1938) was a Norwegian historian, teacher, and political scientist. He was one of the world's foremost exponents of the theory and practice of internationalism.

Lange was born in Stavanger, Norway on September 17, 1869. His father was a military engineer. He graduated from secondary school in 1887 and later went to travel and study history, English, and French at the University of Oslo in Oslo, Norway. He received the cand. philol. degree in 1893. He taught at secondary schools for many years and eventually returned to the University of Oslo to receive a doctorate.

His support of internationalism was demonstrated by the first of a three volume historical treatise (Histoire de l'internationalisme). The work, published in 1919, was said to contribute to the ideological preparation for the League of Nations. For this and all his other activities, Lange shared the Nobel Peace Prize with Hjalmar Branting in 1921.

All content from Kiddle encyclopedia articles (including the article images and facts) can be freely used under Attribution-ShareAlike license, unless stated otherwise. Cite this article:
Christian Lous Lange Facts for Kids. Kiddle Encyclopedia.