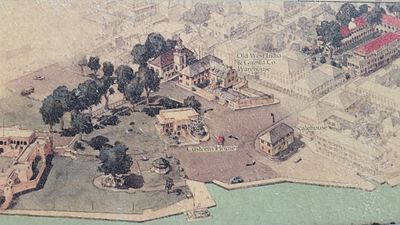 Christiansted National Historic Site commemorates urban colonial development of the Virgin Islands. It features 18th and 19th century structures in the heart of Christiansted, the capital of the former Danish West Indies on St. Croix Island.

Beginning in May 1735, Christiansted was developed using a grid system. The Building Code of 1747 dictated street widths, setbacks, zoning, and building material. Masonry structures were the norm by the 1760s, and neoclassical architecture characterized the colonial government buildings.

The fort was constructed in 1738 on the remains of an earlier French fortification destroyed by a hurricane. The fort protected commerce from piracy and privateers, plus the local citizens from slave revolts. The first Danish governors were also housed here. The British occupied the colony from 1801 to 1803 and from 1807 to 1815. The fort housed the police headquarters, court offices, courthouse and archives starting in 1878. The soldiers were replaced by 60 gendarmes in 1906 and remained until Transfer Day in 1917.

The fort also served as the colony jail. A notable inmate was the mother of Alexander Hamilton, Rachel Faucette. She was wed to her first husband, Johann Michael Lavien, in 1745 at age sixteen. In 1750, she refused to live with Lavien any longer, an offense for which her husband had her jailed under Danish law. She spent several months in a 10 by 13 foot cell with one small window. Soon after being released, she fled to the British West Indies, where she met Hamilton's father.

The site was first established on March 4, 1952, as the Virgin Islands National Historic Site, through the initiative of concerned local citizens. Its purpose was to preserve the historic structures and grounds within its boundaries, and to interpret the Danish economy and way of life between 1733 and 1917, including colonial administration, military and naval establishment, international trade (including slave trade), religious diversity, architecture, trades, and crime and punishment. The site was renamed on January 16, 1961. As with all historic areas administered by the National Park Service, the historic site was listed on the National Register of Historic Places on October 15, 1966.

As of 2016[update], the National Park Service planned to celebrate its centennial with an initiative to rehabilitate the main warehouse facility into a slave trade museum, and to restore the complex to its 1833 appearance.

View from the Steeple Building

All content from Kiddle encyclopedia articles (including the article images and facts) can be freely used under Attribution-ShareAlike license, unless stated otherwise. Cite this article:
Christiansted National Historic Site Facts for Kids. Kiddle Encyclopedia.