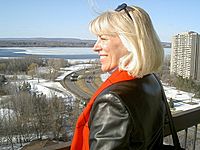 Christine Charbonneau (18 October 1943 – 29 May 2014) was a Canadian singer and songwriter. She made her first appearance in 1973. She worked with Celine Dion during her thirty-year career.

Charbonneau was born in Montreal, Quebec, Canada. He died from cancer, aged 70.

All content from Kiddle encyclopedia articles (including the article images and facts) can be freely used under Attribution-ShareAlike license, unless stated otherwise. Cite this article:
Christine Charbonneau Facts for Kids. Kiddle Encyclopedia.