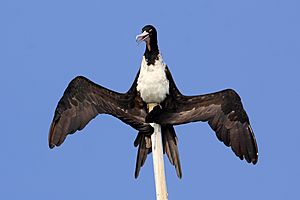 The Christmas frigatebird is a large lightly built seabird with brownish-black plumage, long narrow wings and a deeply forked tail. It has a wingspan of around 2.15 m (7.1 ft). The male has an egg shaped white patch on his belly and a striking red gular sac which he inflates to attract a mate. The female is slightly larger than the male and has a white breast and belly. They feed on fish taken in flight from the ocean's surface (mostly flying fish), and sometimes indulge in kleptoparasitism, harassing other birds to force them to regurgitate their food. The species is listed as critically endangered by the International Union for Conservation of Nature. 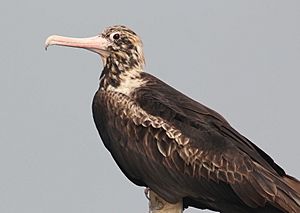 A juvenile at Jakarta Bay, Indonesia

The Christmas frigatebird measures 89–100 cm (35–39 in) in length, has a wingspan of 205–230 cm (81–91 in) and weighs around 1,550 g (3.42 lb). The adult male of this species is easily identified, since he is all black except for a white belly patch. Other plumages resemble those of the smaller lesser frigatebird, but have whiter bellies and longer white underwing spurs.

The Christmas frigatebird is endemic to Christmas Island and breeds in only four main nesting colonies. In 2003 there were 1,200 breeding pairs but as frigatebirds normally breed every other year, the total adult population was estimated to be between 3,600 and 7,200 individuals. The species has a small population and breeds on just one island. It is therefore listed by the International Union for Conservation of Nature as "Critically Endangered".

All content from Kiddle encyclopedia articles (including the article images and facts) can be freely used under Attribution-ShareAlike license, unless stated otherwise. Cite this article:
Christmas frigatebird Facts for Kids. Kiddle Encyclopedia.