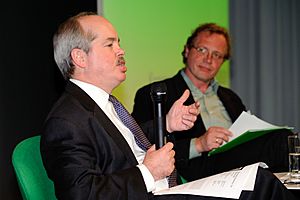 Christopher Flavin is the President of the Worldwatch Institute, an independent research organization focused on natural resource and environmental issues, based in Washington, DC. He is also a founding member of the Board of Directors of the Business Council for Sustainable Energy] and is a member of the National Academy of Sciences Board on Energy and Environmental Systems, the Climate Institute, and the Environmental and Energy Study Institute. His research and writing focus is international energy and climate policy.

Flavin has participated in several notable international conferences, including the Earth Summit in Rio de Janeiro in 1992 and the Climate Change Conference in Kyoto, Japan, in 1997. He has testified before national and state legislatures and meets frequently with government and international leaders.

All content from Kiddle encyclopedia articles (including the article images and facts) can be freely used under Attribution-ShareAlike license, unless stated otherwise. Cite this article:
Christopher Flavin Facts for Kids. Kiddle Encyclopedia.