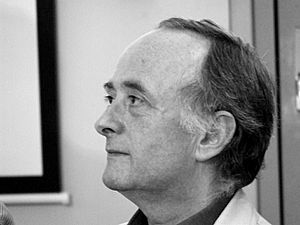 Christopher John Reid, FRSL (born 13 May 1949) is a British poet, essayist, cartoonist, and writer. In January 2010 he won the 2009 Costa Book Award for A Scattering, written as a tribute to his late wife, the actress Lucinda Gane. Beside winning the poetry category, Reid became the first poet to take the overall Costa Book of the Year since Seamus Heaney in 1999. He had been nominated for Whitbread Awards in 1996 and in 1997 (Costa Awards under their previous name).

Reid was born in Hong Kong. A contemporary of Martin Amis, he was educated at Tonbridge School and Exeter College, Oxford. He is an exponent of Martian poetry, which employs unusual metaphors to render everyday experiences and objects unfamiliar. He has worked as poetry editor at Faber and Faber and Professor of Creative Writing at the University of Hull.

All content from Kiddle encyclopedia articles (including the article images and facts) can be freely used under Attribution-ShareAlike license, unless stated otherwise. Cite this article:
Christopher Reid Facts for Kids. Kiddle Encyclopedia.