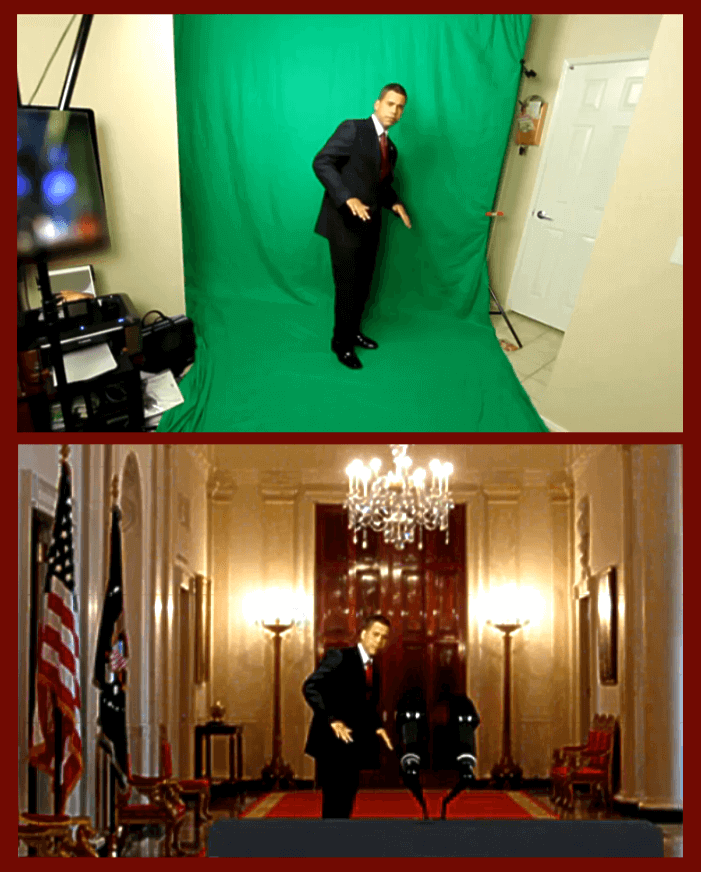 A man using the chroma key.

Chroma key Chroma key compositing, or chroma keying, is a special effects / post-production technique for compositing (layering) two images or video streams together based on color hues (chroma range). The technique has been used heavily in many fields to remove a background from the subject of a photo or video particularly the newscasting, motion picture and videogame industries.

It is commonly used for weather forecast broadcasts, wherein a news presenter is usually seen standing in front of a large CGI map during live television newscasts, though in actuality it is a large blue or green background. When using a blue screen, different weather maps are added on the parts of the image where the color is blue. If the news presenter wears blue clothes, his or her clothes will also be replaced with the background video. Chroma keying is also common in the entertainment industry for special effects in movies and videogames.

Some films make heavy use of chroma key to add backgrounds that are constructed entirely using computer-generated imagery (CGI).

The principal subject is filmed or photographed against a background consisting of a single color or a relatively narrow range of colors, usually blue or green because these colors are considered to be the furthest away from skin tone. The portions of the video which match the preselected color are replaced by the alternate background video. This process is commonly known as "keying", "keying out" or simply a "key".

All content from Kiddle encyclopedia articles (including the article images and facts) can be freely used under Attribution-ShareAlike license, unless stated otherwise. Cite this article:
Chroma key Facts for Kids. Kiddle Encyclopedia.