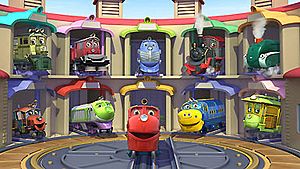 Chuggington characters in their roundhouse

Chuggington (also known as Chuggington: Tales from the Rails in Series 6) is a children's computer-animated television series produced by Ludorum plc. It is broadcast on the BBC children's channel CBeebies and other channels internationally. It has recently been announced that a new series of episodes will be released in 2020.

In the fictional town of Chuggington are young novice railway anthropomorphic locomotives ('trainees') Koko, Wilson, Brewster, Hoot, Toot and Piper. The trainees (and sometimes the more experienced Chuggers) learn the value of loyal friendship, telling the truth, listening carefully, persisting under adversity, completing tasks, resolving conflict without violence, and similar values. The locomotives, called "Chuggers", are intelligent, empathetic, independent and somewhat self-directed. They have mobile facial and body features. Chuggers have no crews, yet some have crew doors that can open. Chuggers regularly interact with humans such as passengers and maintenance crews. Some Chuggers are modeled after well-known trains.

The town of Chuggington has a central area of large modern buildings. Side-by-side railway tunnels coloured red, blue, yellow, green run under the town centre, leading to the outside world. Countryside settings include a farm, a safari park, and a quarry. A 'Chugston Hotel' is mentioned. "Old Chuggington", an abandoned old town with a similar name to the titular town, overgrown with wild vegetation, is occasionally visited.

Brewster, Koko, and Wilson are the main characters in Chuggington.

The creative core behind Chuggington is Sarah Ball, a producer and director who worked on Bob the Builder, and Don Toht, who designed the characters and sets.

The computer animation is made with Autodesk Maya software.

As well as the regular ten-minute episodes, there are four-minute shows, Chuggington: Badge Quest, focusing on the trainees' efforts to earn reward badges for their "Chugger" training.

Three Chuggington specials were commissioned for release on DVD from 2013 onwards.

On 10 December 2018, Herschend Entertainment Studios acquired the rights to the series.

The first series of 52 episodes was sold to broadcasters including the BBC, ABC (Australia), TF1 (France) and Super RTL (Germany) in a deal announced in February 2008. A second series of 26 episodes was purchased by the BBC and many other broadcasters throughout the world. Aimed at children between the ages of 3 and 6, Chuggington made its UK debut as a "soft launch" on BBC Two on 22 September 2008.

In January 2009 it was announced that RC2 would be producing Chuggington toys under their Learning Curve brand; the toys were released to the market in 2010. RC2 contributed to half of the series' production budget in exchange for long-term global toy licensing rights.

DVDs from Anchor Bay Entertainment include the first, entitled Chuggington: Let's Ride the Rails was released in March 2009 containing six episodes. A second DVD, Action Stations, released in October 2009, contained another six. The third DVD release, Wheels to the Rails, with another six episodes, is due out in late November. Anchor Bay’s Chuggington: Let’s Ride the Rails was the first Chuggington DVD to be released nationwide in the United States on 8 February 2010.

In the UK, several children's books are in the works, including Koko on Call: A Nightlight Adventure, based on an early episode. Publications International and Scholastic introduced Chuggington books to the US market in late 2010 and early 2011, respectively.

Later in 2010, the interactive range was released in the UK. The chuggers and Vee, their dispatcher, can interact with each other using 'Smart Talk' technology and over 300 stored phrases. Each chugger can recognize the other chuggers, and their train stops. The interactive phrases spoken depend on which chuggers and locations are placed together, giving a more varied, but not random, conversation. The Chuggington Interactive Railway was released in the United States in February 2011.

The Chuggington Wooden Railway was released in September 2010 to Canada, and on 1 March 2011 to specialty retailers in the United States. It is compatible with all other wooden railway systems.

In late 2011, Mega Brands released the 'Chuggington Construction' range, but was now discontinued, as of 2013.

In the United States other Chuggington products include games (I Can Do That! Games), puzzles (Cardinal), and activity sets (Crayola).

In 2012, the Plarail Chuggington range was released.

In 2013 Bachmann Trains made a series of Chuggington electric train sets and separate sale engines and cars. It is compatible with all other HO scale systems by other companies and is made to work with the Thomas & Friends range. In 2017, Bachmann Trains have discontinued the Chuggington range.

According to Okayama Electric Tramway press report on 12 January 2018, it will be operated in 2 cars and 1 train with its own decorated appearance that reproduced Wilson and Brewster in Japan. With the all-seat reservation system, the operation start date is 16 March 2019. It is confirmed as the world's first in the railroad and tram related motif with this character as a motif.

All content from Kiddle encyclopedia articles (including the article images and facts) can be freely used under Attribution-ShareAlike license, unless stated otherwise. Cite this article:
Chuggington Facts for Kids. Kiddle Encyclopedia.