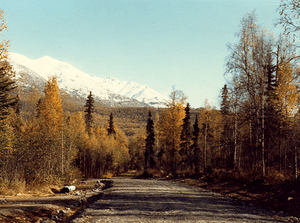 Needels Drive, near the intersection of the Old Glenn Highway and North Birchwood Loop Road, as it appeared in 1982. The road has since been paved.

Chugiak is an unincorporated community in the Municipality of Anchorage in the U.S. state of Alaska, situated approximately 20 miles (32 km) northeast of downtown Anchorage.

It is located between Eagle River to the south, and Eklutna to the north, and between Knik Arm to the west and the Chugach Mountains to the east.

The name "Chugiak" comes from a Dena'ina word meaning "place of many places". Chugiak was first heavily settled in the 1950s, primarily by the homesteading by former military personnel who had served in Alaska during World War II. It is currently one of the main sites of suburban expansion near Anchorage.

There are about 8,300 residents, most of whom work in Anchorage or the Matanuska-Susitna Valley, and are spread out mainly along the Glenn Highway. The urban cluster of Anchorage Northeast (including Chugiak and surroundings) has an estimated population of 31,000 (2010), covering an area of 39 km².

Chugiak is also the home of the "Birchwood Shooting & Recreational Park", (adjacent to the Birchwood Airport), the largest rifle, pistol, and shotgun range facility in the State of Alaska. The annual Alaska State Trap and Skeet competitions are held there.

Chugiak has its own post office, with United States postal zip-code 99567, which also serves the neighboring small unincorporated communities of Birchwood and Peters Creek.

All content from Kiddle encyclopedia articles (including the article images and facts) can be freely used under Attribution-ShareAlike license, unless stated otherwise. Cite this article:
Chugiak, Anchorage Facts for Kids. Kiddle Encyclopedia.