Church Missions House (also known as 281 Park Avenue South) is a historic building and registered landmark in New York City on Park Avenue South on the corner of East 22nd Street, in an area once known as "Charity Row". The Church Missions House building was built between 1892 and 1894 for the Domestic and Foreign Missionary Society of the Episcopal Church. The building was sold in 1963 to the Federation of Protestant Welfare Agencies, which occupied the building until 2015. 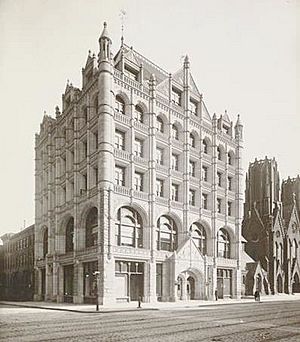 The Domestic and Foreign Missionary Society moved from Philadelphia to New York City in 1835. The Domestic Committee and the Foreign Committee rented separate office spaces in different locations from 1835 to 1840, and then moved to another rented office space at 281 Broadway. In 1864, the Society began exploring the possibility of finding a permanent home. In 1889, a site was selected for a new building for the Society.

The building was designed by architects Robert W. Gibson and Edward J. Neville Stent, with a steel structure and Medieval-inspired facade. Gibson took his inspiration from the town halls of Haarlem and Medieval Amsterdam, and the result is "equal to buildings of the Flemish and Dutch Renaissance."

In 1963, the Federation of Protestant Welfare Agencies bought the building. It was designated a New York City landmark in 1979, and was added to the National Register of Historic Places in 1982. It was restored in the early, 1990s by the firm of Kapell & Kastow,

As part of the renovations, two floors were made available to rent to other non-profit organizations and space was made available for a conference facility on the ground floor. The building, which sits across 22nd Street from the United Charities Building, is part of a proposed extension to the Gramercy Park Historic District.

The building was sold in 2014 for approximately $50 million to RFR Realty and was to be converted to condominiums, with shops on the ground floor. In 2017, Swedish photography museum Fotografiska announced they are setting up an art gallery and restaurants in the building.

All content from Kiddle encyclopedia articles (including the article images and facts) can be freely used under Attribution-ShareAlike license, unless stated otherwise. Cite this article:
Church Missions House Facts for Kids. Kiddle Encyclopedia.