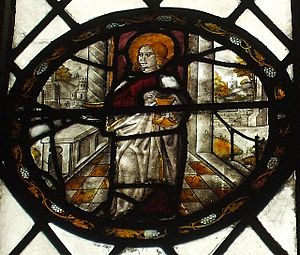 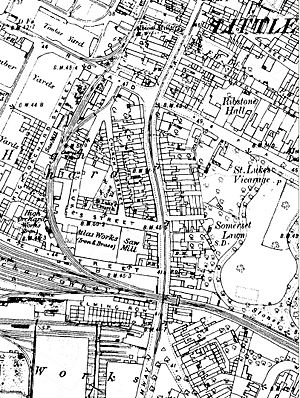 The Church of St. Luke, High Orchard, Gloucester, was a Church of England church built and endowed by the reverend Samuel Lysons, rector of Rodmarton, who was also the first minister.

The church was designed by the architect Thomas Fulljames of Gloucester in what The Gentleman's Magazine described as "a neat structure in the later style of Early English". It was consecrated in 1841.

The first minister was Samuel Lysons, rector of Rodmarton. He resigned in 1866.

The curate in 1846 was Lewis Alexander Beck.

St Luke's was demolished in 1934 and stained glass from the building, much of it German or Dutch of the fifteenth to the eighteenth centuries, was reused at Holy Trinity Church, Longlevens.

All content from Kiddle encyclopedia articles (including the article images and facts) can be freely used under Attribution-ShareAlike license, unless stated otherwise. Cite this article:
Church of St. Luke, Gloucester Facts for Kids. Kiddle Encyclopedia.