Kids Encyclopedia Facts
Not to be confused with Church of St. Andrew and St. Paul (Montreal).

The Church of Saint Paul and Saint Andrew is a historic United Methodist church located in the Upper West Side of New York City, New York, on West 86th Street. The Church is known for being socially liberal and for accepting all people. The Church hosts a number of performing arts groups, including the Empire City Men's Chorus, The Prospect Theater Company, and David Parker & The Bang Group. 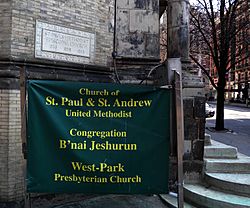 The church building is shared with two other congregations

At present, the Church of St. Paul & St. Andrew (SPSA) is a member of the Reconciling Ministries Network of the United Methodist Church and its New York Annual Conference affiliate, Methodists in New Directions (MIND). The congregation welcomes all who wish to worship God the Creator, God the Redeemer and God the Holy Spirit; without regard to any arbitrary condition. The 2010 Service of Lessons and Carols was featured on 31 December 2010 on the CBS Television Network. The senior pastor is Rev. Dr. James (K) Karpen and the associate pastors are Rev. Julia Kristeller and Siobhan Sargent. Bridget Cabrera serves as Minister for Young Adults and Frank Glass is the Minister of Music. SPSA also serves as host sanctuary for Congregation B'nai Jeshuran. Also housed at 263 West 86th Street are the West Side Campaign Against Hunger, a food pantry and nutritional resource center, and West End Theatre, presenting many performing arts companies. The church building was declared a landmark by the New York City Landmarks Preservation Commission in 1981.

All content from Kiddle encyclopedia articles (including the article images and facts) can be freely used under Attribution-ShareAlike license, unless stated otherwise. Cite this article:
Church of St. Paul and St. Andrew (New York City) Facts for Kids. Kiddle Encyclopedia.