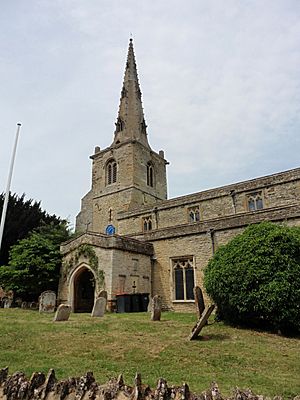 Surviving architectural elements date back at least to the early 13th century. A 1912 report about the church indicated that it had a chancel, nave, north aisle, south aisle, south porch and west tower. The south arcade of the nave, the north arcade the chancel and tower were all dated to the 13th century. There were four bells in 1912, dating from 1609 to 1618. The leaning spire was built in the 14th century but was modified in the 14th and 15th century. It was in danger of collapse but was restored in the 19th century.

During the reign of Henry II, the church was part of the endowment to the Canons Ashby Priory by Stephen la Leye. During the Dissolution it became Crown property. In 1545, the advowson was granted to Daniel Payne. The church is the final resting place of Richard Orlebar the High Sheriff of Bedfordshire (died 1733) and his wife the culinary writer Diana Astry (died 1716), who had owned Hinwick House.

The pipe organ was restored by the 92nd Bomb Group Memorial Association. The 92nd group had been stationed at the RAF Podington airfield during WW II and flew nearly 300 operational missions from that base.

All content from Kiddle encyclopedia articles (including the article images and facts) can be freely used under Attribution-ShareAlike license, unless stated otherwise. Cite this article:
Church of St Mary, Podington Facts for Kids. Kiddle Encyclopedia.