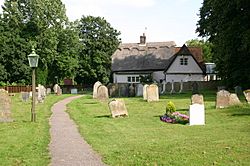 Church of St Nicholas is the parish church of Wilden, Bedfordshire, England, in the Diocese of St Albans. It became a Grade I listed building on 13 July 1964.

The current building dates mainly from 15th century, but an earlier building on the site appears in a small part of the south wall, dating from the 14th century. The church is built of cobblestone, with some ashlar dressing on the buttresses.

The church holds Sunday services at 10.30 am or 6 pm, more or less alternately.

All content from Kiddle encyclopedia articles (including the article images and facts) can be freely used under Attribution-ShareAlike license, unless stated otherwise. Cite this article:
Church of St Nicholas, Wilden, Bedfordshire Facts for Kids. Kiddle Encyclopedia.