Elm Avenue and Churchville Lane cross over the reservoir. 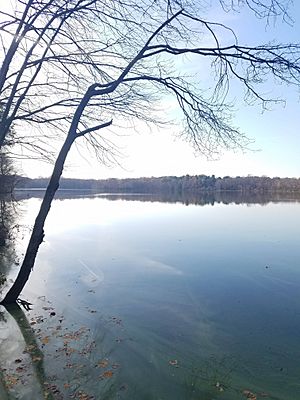 The reservoir was created in 1942 by the Springfield water company to act as a reserve of water . In times of low water it could be emptied through Iron Works Creek and from there into Mill Creek, which eventually empties into the Neshaminy Creek. Once the water reaches the Neshaminy, it can be withdrawn through the pumping station at Neshaminy Falls.

When the reservoir was created it was surrounded by a rural land and few houses. By the late 1950s land development had expanded and new residents began to move to the Churchville area.

The Department of Parks had also been created to provide land for use of both humans and wildlife. The Churchville Nature center was one of the first locations selected due to its diversity of habitat including a woodlot, open field, meadow-land, and the reservoir.

All content from Kiddle encyclopedia articles (including the article images and facts) can be freely used under Attribution-ShareAlike license, unless stated otherwise. Cite this article:
Churchville Reservoir Facts for Kids. Kiddle Encyclopedia.