Kids Encyclopedia Facts
This page is about the syndrome. For the song, see C\C (Cinderella\Complex).
Not to be confused with Cinderella effect. 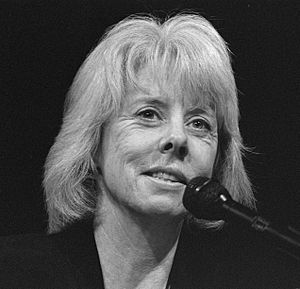 The Cinderella complex was first described by Colette Dowling, who wrote a book on women's fear of independence – an unconscious desire to be taken care of by others. The complex is said to become more apparent as a person grows older.

The complex is named after the fairy tale character Cinderella. It is based on the idea of femininity portrayed in that story, where a woman is beautiful, graceful, polite, supportive, hardworking, independent, and maligned by the females of her society, but she is not capable of changing her situations with her own actions and must be helped by an outside force, usually a male (i.e., the Prince).

Others point to Ronald Fairbairn's concept of mature dependency, to challenge cultural disparagement of dependency in favor of an ideal of isolated independence. Carol Gilligan's championship of a web of connections as a feminist goal, rather than the solitary male hero, is also invoked to defend the Cinderella complex's tendency to define the self in terms of a mate/settled relationship.

All content from Kiddle encyclopedia articles (including the article images and facts) can be freely used under Attribution-ShareAlike license, unless stated otherwise. Cite this article:
Cinderella complex Facts for Kids. Kiddle Encyclopedia.