Circoxena ditrocha is a species of moth in the family Blastodacnidae. This species is endemic to New Zealand. It is classified as "At Risk, Naturally Uncommon" by the Department of Conservation. 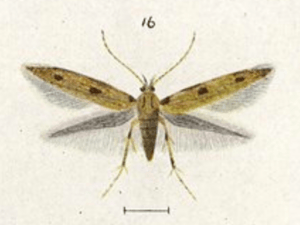 This species was first described by Edward Meyrick in 1916 using a specimen collected by George Hudson at Wainuiomata in December. Hudson discussed and illustrated the species in his 1928 publication The butterflies and moths of New Zealand. In 1973 John S. Dugdale discussed the species and illustrated the wing venation as well as the genitalia of both the male and female. The holotype specimen is held at the Natural History Museum, London.

Meyrick described this species as follows:

Alfred Philpott studied and described the male genitalia of the species in 1927.

This species is endemic to New Zealand. It has been found from Auckland to Invercargill.

The adults of this species have been found on the wing in December and March. Hudson noted that C. ditrocha was a sluggish flyer and could be collected by sweeping foliage.

The host plants of the larvae of this moth are unknown, but the larva may be a seed borer. Adults of this species prefer habitat at the edges of forest or scrub and appear to be associated with Pseudopanax arboreus.

This species has been classified as having the "At Risk, Naturally Uncommon" conservation status under the New Zealand Threat Classification System.

All content from Kiddle encyclopedia articles (including the article images and facts) can be freely used under Attribution-ShareAlike license, unless stated otherwise. Cite this article:
Circoxena ditrocha Facts for Kids. Kiddle Encyclopedia.