Cisthene plumbea, the lead-colored lichen moth, is a moth of the family Erebidae. The species was first described by Richard Harper Stretch in 1885. It is found in eastern North America, from southern New Jersey south to northern Florida, west to Wisconsin and Texas. 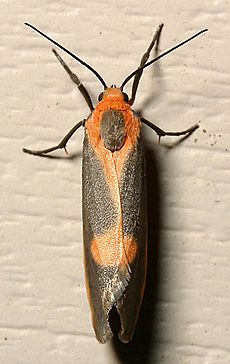 The wingspan is 17–21 mm. Adults are on wing from June to September. There are two generations per year in most of its range. In Louisiana, there are three annual generations.

The larvae feed on lichen.

All content from Kiddle encyclopedia articles (including the article images and facts) can be freely used under Attribution-ShareAlike license, unless stated otherwise. Cite this article:
Cisthene plumbea Facts for Kids. Kiddle Encyclopedia.