The Citizens' War Memorial (alternate: Soldiers' War Memorial) in Cathedral Square, Christchurch, is one of the two major memorials in the city to World War I. It is located immediately north of ChristChurch Cathedral. The annual Anzac Day service was held there until the February 2011 earthquake. It is a Category I heritage structure registered with Heritage New Zealand. In 2020, it became known that the memorial is to be removed from its current site and put into storage.

The Citizens' War Memorial is located in Cathedral Square in Christchurch immediately north of ChristChurch Cathedral. The land on which it is built is owned by the Anglican Church. The heritage tram passes the memorial on the road that goes behind and around the Cathedral. 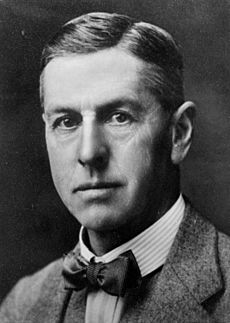 George Gould (1865–1941) was a successful businessman, farmer and stock breeder. He was a director of The Press from 1903 until his death with one brief interruption. He chaired the board through the years of the Christchurch newspaper war in 1934–1935. His company, Pyne Gould Corporation Limited, is these days listed on the New Zealand Stock Market.

After World War I, many ideas for a war memorial were put forward. Gould proposed a column opposite of ChristChurch Cathedral and by 1920, this was one of the three dominant proposals. The Bridge of Remembrance was adopted, while the hall of memories idea disappeared due to lack of support. Gould's idea received the support of the Canterbury Anglican elite. While the Bridge of Remembrance was unveiled in 1924, the Christchurch City Council opposed the Cathedral Square proposal and stopped it from going ahead. The argument was that the Cathedral would dwarf the memorial, and that the bustling nature of the Square was an inappropriate setting for a place of reflection. In 1933, the Godley Statue was relocated from its position just north of the Cathedral to its original location opposite it. Gould seized the opportunity and proposed the vacated site for the memorial, and the Anglican Church as the owner of the land agreed under the condition that a cross be incorporated into the design. Gould promoted the memorial as "an emblem of peace rather than ... war". While the original intention was to import statuary from England, the manufacturers' association wanted the work to be done locally and put Trethewey's name forward, but the Returned Services' Association opposed this as he had not gone to war. 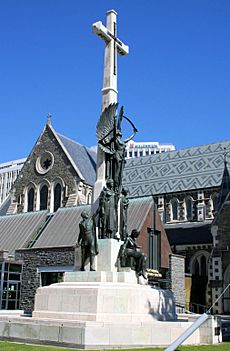 The Citizens' War Memorial in front of the Cathedral 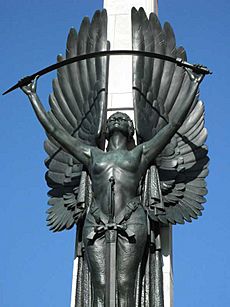 The design was to be of peace not war; a cross should be included, as well as an expression of high ideals. The memorial was designed by the architect George Hart and the Christchurch sculptor William Trethewey (1892–1956). According to Trethewey's son, the sculptor took out a pencil one lunch and sketched a possible war memorial. He took the sketch to Hart and from this, they produced the design. The design was accepted in 1933, after which Trethewey refined it before carving the figures in clay, boxing them up, and forwarding them for casting to Arthur Bryan Burton's Thames Ditton Foundry in Surrey. Trethewey travelled to London and supervised the casting of the bronze figures.

The Citizens' War Memorial (or Soldiers' War Memorial) was unveiled on 9 June 1937 by Colonel S C P Nicholls, with Archbishop Julius conducting the service. It was erected next to the Cathedral on a site which had been occupied by the statue of John Robert Godley, which was moved back to its original location. According to MacLean and Phillips in The sorrow and the pride: New Zealand war memorials, it is possible to make 'a good case...for it being the finest public monument in the country'.

Each year on Anzac Day, services are held at the memorial with thousands of Cantabrians in attendance. In 2011, with the Christchurch Central City cordoned off following the earthquake in February, the service was held in Hagley Park instead. In subsequent years, the annual service went to Cranmer Square. Just prior to the 2017 Anzac Day service, the Christchurch branch of the Royal New Zealand Returned and Services' Association (RSA) asked for the memorial to be relocated to Cranmer Square, as the protracted negotiations between the government and the Anglican Church about the restoration of the adjacent Cathedral deny the public access. In 2020, it became known that the plans for the restoration of the Cathedral required the removal of the Citizens' War Memorial; it will be removed and put into storage unless a new location can be agreed on.

The bronze memorial stands 16 metres (52 ft) in height. The compilation of bronzes were cast in London and are characterised as classicising idealism. The allegorical figures included Youth, Sacrifice, Justice, Valour, and Peace. They were based on Trethewey's family and friends, such as Trethewey's daughter Pauline, his workman, Bob Hampton who modelled for Youth, as well as the religious figure of Saint George. An engraving at the base of the memorial states:

In grateful remembrance of the sons and daughters of Canterbury who fell in the Great War 1914–1918 Give peace in our time o Lord.

The memorial is registered with Heritage New Zealand as a Category I heritage structure. Originally registered in 1984 by the New Zealand Historic Places Trust, its category was changed in 1995.

All content from Kiddle encyclopedia articles (including the article images and facts) can be freely used under Attribution-ShareAlike license, unless stated otherwise. Cite this article:
Citizens' War Memorial Facts for Kids. Kiddle Encyclopedia.